So I may have watched The Last Jedi and gotten into a Star Wars kick.. again. That and I got a Porg and Rey and BB-8 for my birthday, and while I like the Star Wars ships, there is a definite lack of interiors to put my characters in. There is a Falcon interior, but my YT-1300 would NOT be in that bad of shape. More like what we've seen out of the Solo film so far.

In an effort to keep my Star Wars creations separate from my Star Trek creations, I started another thread.

I'm currently working on a 'stock' interior YT-1300pf with an exterior that's going to have less greeblie bits hanging off of it than the later years of the Falcon. Just did a basic layout for it at this point and I'm probably going room by room, and no, it doesn't match the Falcon exactly and it's not meant to. I may even mirror it to throw the cockpit on the other side of the ship. We'll have to see where my flights of fancy take me. I am thinking I'm going to need to 'stock' up the exterior a bit and plug some holes but We'll see. I want the interior done first. Got some rough layouts done for this wip. You can see where the corridors are going to go along with crew sleeping quarters, the main hold/galley/lounge, the forward cargo holds, and rear cargo holds/engineering. The cockpit corridor is in place but I haven't even touched the cockpit yet. The boarding ramp is a placeholder I borrowed from another set. And I roughed out a full blown escape pod for the port side. I went with the 'official' length of the Falcon when I started roughing this out so right now the interior with the pod and cockpit are roughly 78 ft by 79.5 ft with a variable height. I put the corridor braces/arches at 7 ft. I honestly have no idea how big they really are but I saw the cockpit door of the Falcon was designed at 6ft7in so I just went a bit taller.

I'm kind of focusing on that main hold/lounge/galley area first and then building out from there. The corridors and the cockpit will probably be the hardest to build I'm thinking. When all is said and done though I'll have a full blown Star Wars 'stock' interior layout of a YT-1300 to play with. Built some small parts of the outside just to be sure on sizing. I also wanted to check the height in the front part of the hold and surprisingly enough, there's enough room for a 6ft high human to walk around without cracking their head on the hull which surprised me.

I'm working on the shell for the corridor and I'm realizing that the way it's laid out in the 'deck plans' the corridor is off on the angles and isn't quite properly circular. I haven't decided quite how I'm going to handle that just yet.

Still, the interior work on the yet un-named light freighter continues. Built up enough of the corridor to slap this together in DAZ Studio and give the micro-set a go. it's just the corridor and bulkhead repeated and yes I'm using what little we saw of the Falcon in the Solo trailers for the look of my freighter. Not everyone beats the hell out of their ship and leaves it that way. :P I don't remember what height I set this character at, but that's supposed to be a 7ft clearance minus the padding and it seems a little low. I may need to make it a little taller/wider. Haven't decided just yet. it's not like on Star Trek where you'll have extensive walking and talking scenes throughout or that there's miles of corridors snaking through the ship so it doesn't need a ton of room, but it needs to be usable. 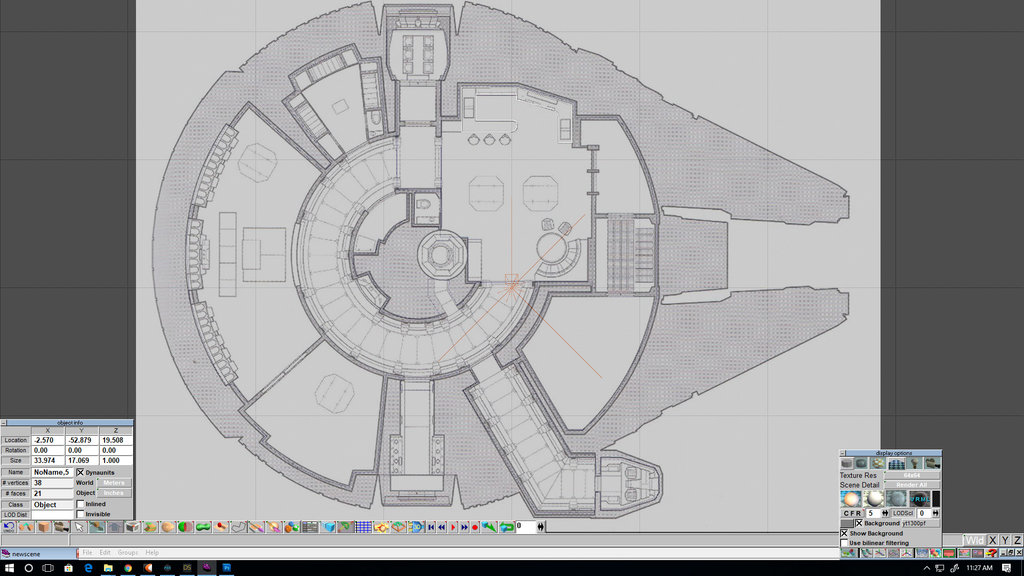