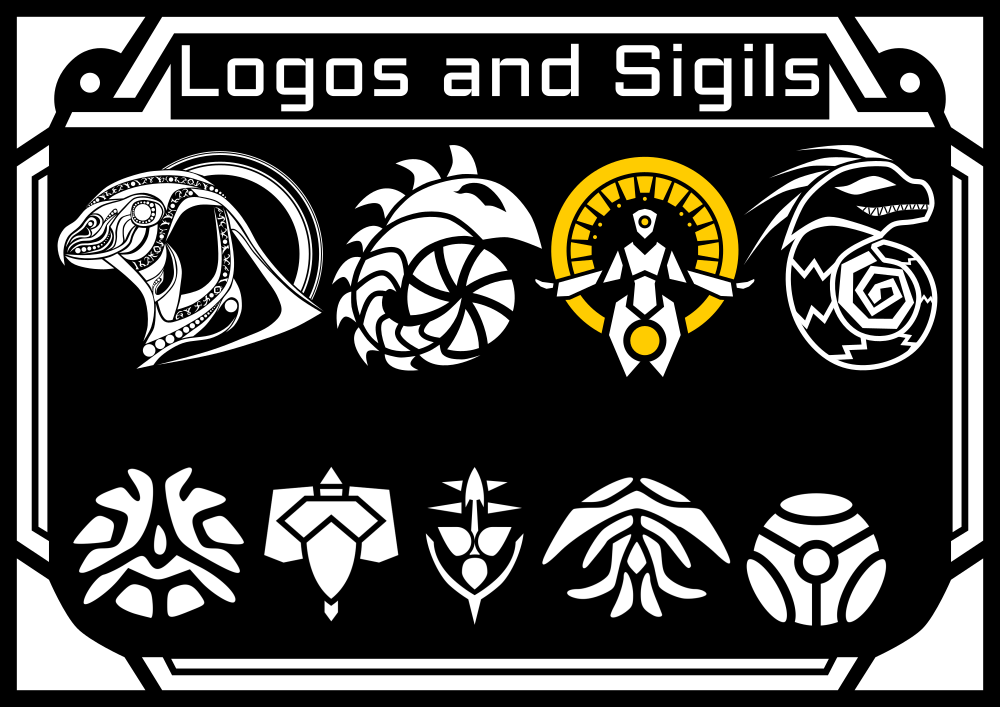 Greetings! I'm just a humble graphics designer who really, really likes working on stuff like logos, sigils, symbols and other such shenaniganry. I make a whole boatload of various things but this here is what is the closest to being my bread and butter.

So, no further ado, here's some of the stuff I am particularly proud of. Besides the stuff in the header image, at the very least. These three images have been designed for an in-progress story (as in, stuck in the form of a bunch of disparaged notes for several years >>), the first of which was mostly done in a wave of Inspiration. Cyberiad, I call it. You can clearly see some religious tones, alongside the more robotic style, as well as the attempt to mimic an audio visualizer inside the halo.

The next one was done soon after, Mikoyan. More aimed and actually related to something in the story, as well as utilizing some tricks I learned since the previous image. You can clearly see the inspiration and similarities between the two, heh.

And then there was this. A book, of sorts, designed to mirror the halo of Mikoyan, but fitting as something that could appear on an actual book.

While I've generally drifted away from Doctor Who somewhere around the Matt Smith era, it still holds a certain place in my heart. And so do the various fanmade versions of Gallifreyan that float on the internet. Hell, they were arguably the reason why I went into graphics stuff like this in the first place. So, well, these are artworks that were based on Sherman's Circular Gallifreyan. Also make for very good avatars when you favor abstract instead of anything more physical, heh. They are a little bit scuffed in their actual writing, but I still love the designs I've ended up with for them.

This is the result of a commission for a certain individual, one that is relatively simple but also rather interesting in the combination of things that they asked of me. The smooth and circular moon motifs, combined with the hard edges of a circuit board ended up producing something rather interesting, I might say.

I make... a helluvalot more, but this is the stuff I am generally most proud of, along with being the stuff that fits the best with the themes of this forum.