I was looking at my 22 year old MSPaint image of Constitution class predecessors and "kitbashes" and figured I make a model based on the design with the shuttlebay on the saucer. I downloaded some of the Alan Sinclair blueprints and called up scifieric's YouTube channel for guidance. My goal isn't to make an exact replica of the 11 foot studio model, but make it a smidgen more realistic without straying from the Jefferies' aesthetic.

As you can see it's 80% to 90% done. Only thing left is small details like windows and hatches, and minor details I may decide to add. The gray rectangles are the maneuvering thrusters which I decided were going to follow the simplicity of the impulse engines. I wanted the warp glows to have a darker, buried appearance as if the energy is coming from the center of the nacelle as opposed to right there at the grill. I'm thinking about going back and making the nacelle caps truer to the studio model with double domes to soften the look of the vanes, which research says were tape, but mine are modeled solids, as I suppose everyone's are.

No textures are used anywhere on this model. Not the impulse and warp glows. And not the lettering. The lettering are Blender's text objects with a shrinkwrap modifier and shadows disabled, because they are slightly above the surface as text objects they are not subdivided very well. And I don't want to convert them to meshes because I can still edit them to change name and number. I'm using airborne2 as a font, and anyone who has made a TOS saucer knows center alignment doesn't match. At least the Sinclair b/p don't match up to the font spacing. For the name, you can get close with adjusting character and/or word spacing. I would have rather the registry be one text object, but I was only able to match it as close as possible to the prints by splitting it into the prefix and number because it requires different spacing on either side of the centered hyphen. Oh, the pains we go through. Plus being able to conform the text to a curve is a tremendous help. I tried a texture at first but it was a lot more work to get it close, and they are permanent unless you want to spend a lot of time making and swapping out textures. I don't. I like hitting that edit button, making the change, and going back to object mode. So much easier. But, hey, they were painting letters on a curved surface, and they did a helluva job.

The yellow hatch is also a shrinkwrapped face without shadows.

I had an idea the shuttlebay doors would open by one set sliding over the next. These give the appearance that that may be the case, but in reality their pivot point doesn't allow that to happen. If I want them to work as real doors, I would have to redesign them and they may not have the same curvature. They were cut from sphere that matched the outline of the prints, so. . . .

The warp glow is achieved by a number of emitting faces shining through a translucent material, and then near the grill through faces with a glass material. The glass sections I borrowed from the Franz Joseph prints of the warp nacelle. It gives it a nice separation behind the grill.

That troublesome trough, I tell you. I tried a Boolean difference. I tried knife project and extrusion. I came to the conclusion that you can do things with wood working tools you can't do in Blender. A Boolean difference will not make that front curve a half circle. I took a shower, and my relaxed brain said, "You idiot, you knife project for the edge of the trough, and delete that shit. And then you build the back wall, and from there, create faces. Slide those verts in the front to scallop it, without proportional editing because that will move too many at once, just one curve section at a time scaled in Y. It came out better. The aft clamshell shape is not perfectly flat because the outer edge is curves of course. But with sharpen edges it's unnoticeable.

I also wanted the pylons to connect to the nacelle in the same region they do on the Constitution class because it's the same engine, and I imagine that specific segment of the interior has the components to mate with plasma conduits. Other sections have other stuff that is there because that is where they need to be.

And credit were credit is due, though its a trick Eric (scifieric) learned, I learned it from him, and grids so easy from a small face with a hole in it, or a funky star pattern, just pops. Yay for arrays! 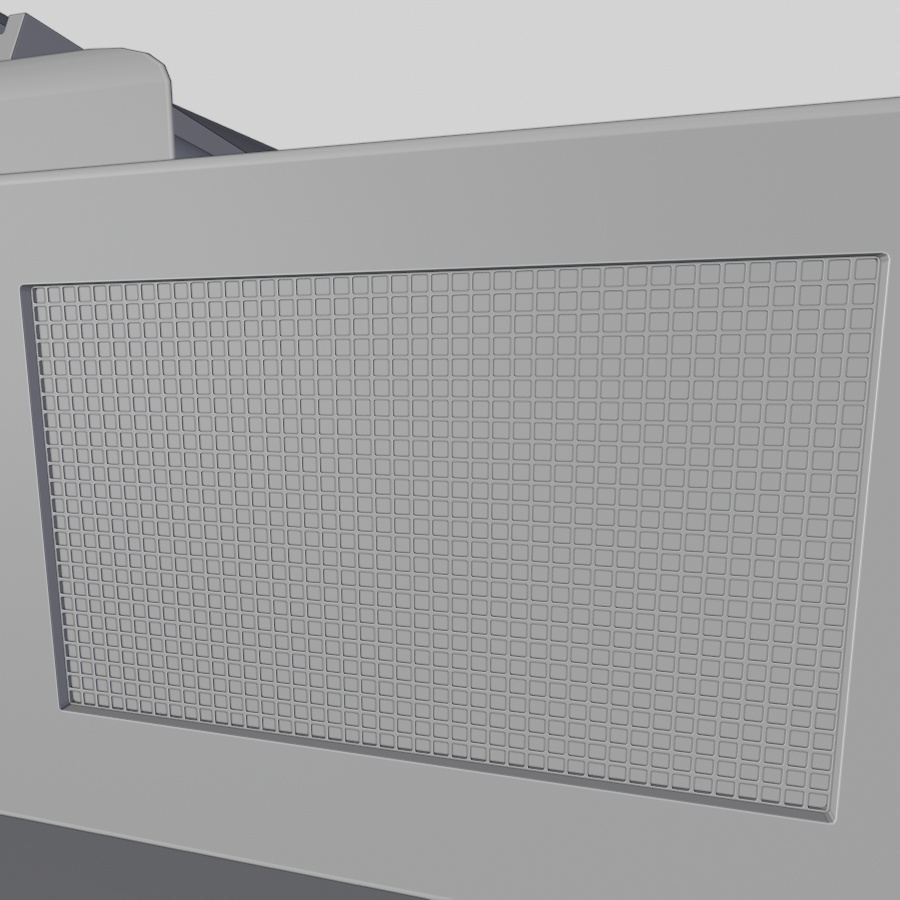 Carried the technique over to the impulse grills because I hate the way the wireframe modifier looks with its angled surfaces. I did not replace the RCS grids because they are joined meshes which would be too much work (for me), and too small to notice anyway. Gotta love super easy techniques.

No texture impulse engines. One of the things I have always wanted to achieve was a good impulse glow with falloff at the edges that did not rely on textures or complex node systems. I thought, (not in the shower that time) what if I take a face that is to be the glowie, and add a loop cut as a fold edge, and then rotate that face back? 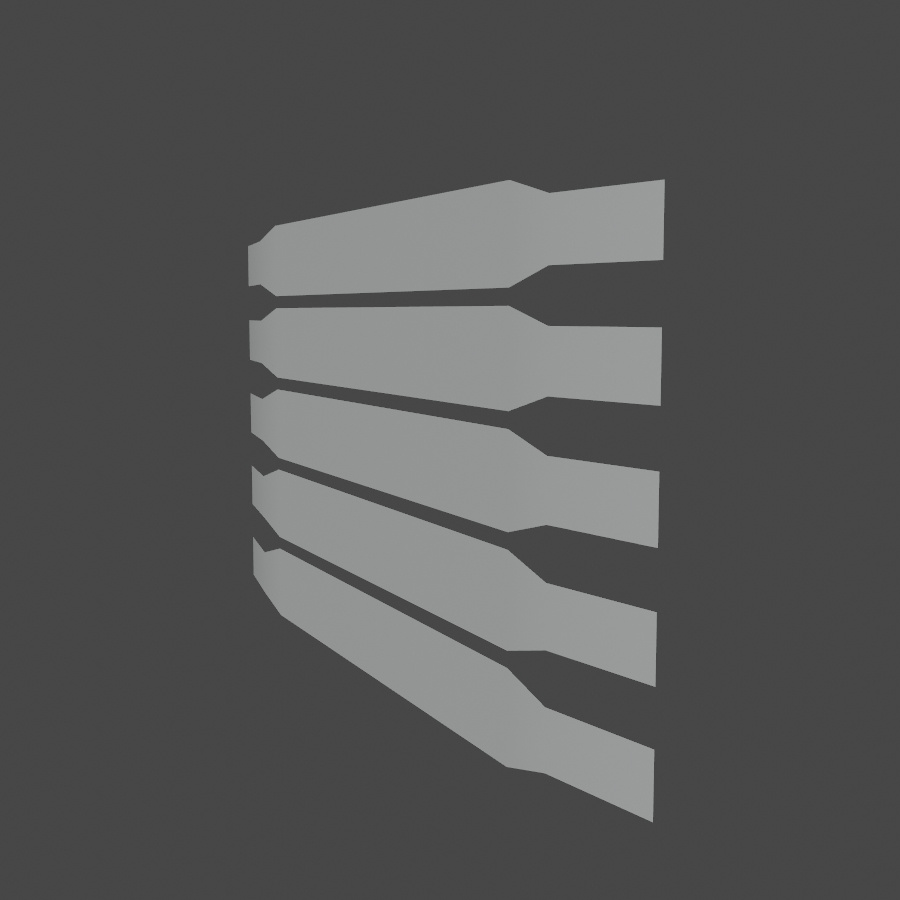 Here is the arrayed geometry with the negative space shaped like the grills on later drives. 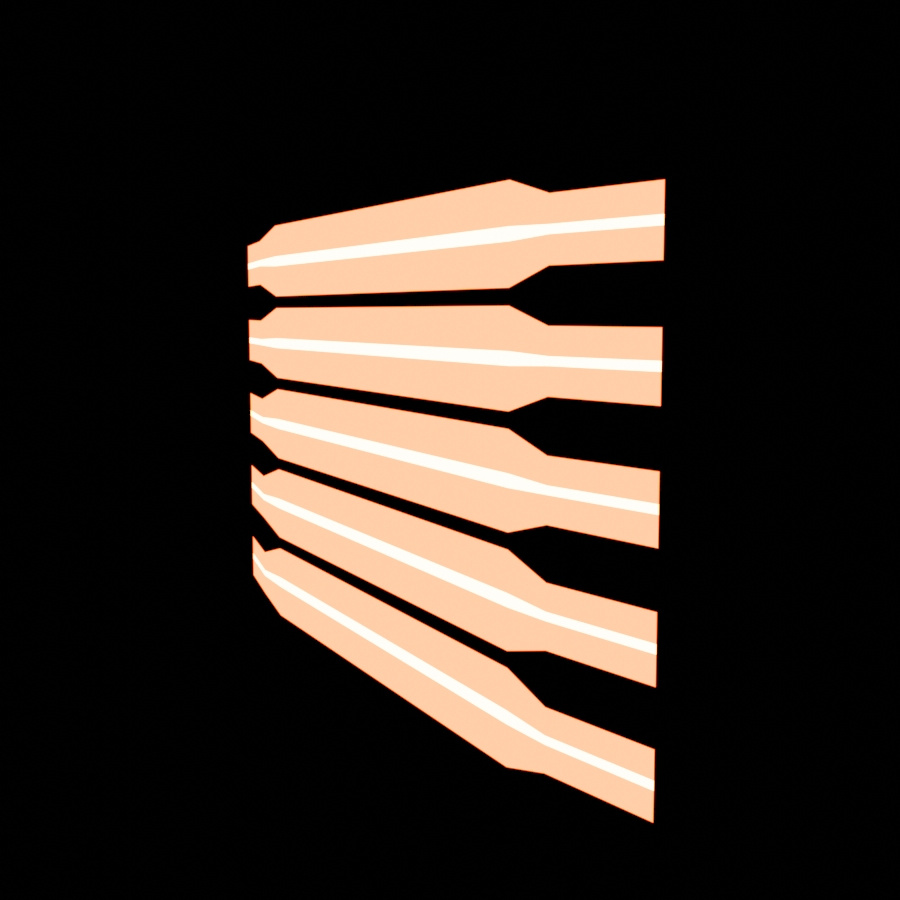 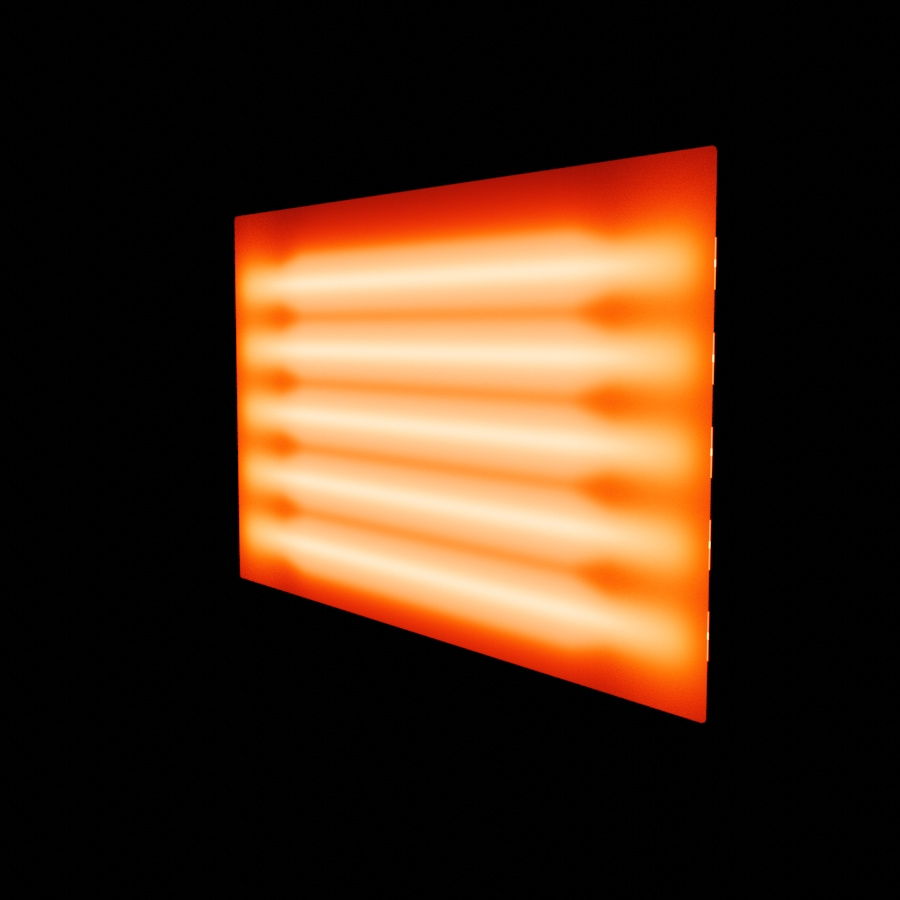 Glowing through a translucent shader. The different colors blend nicely. 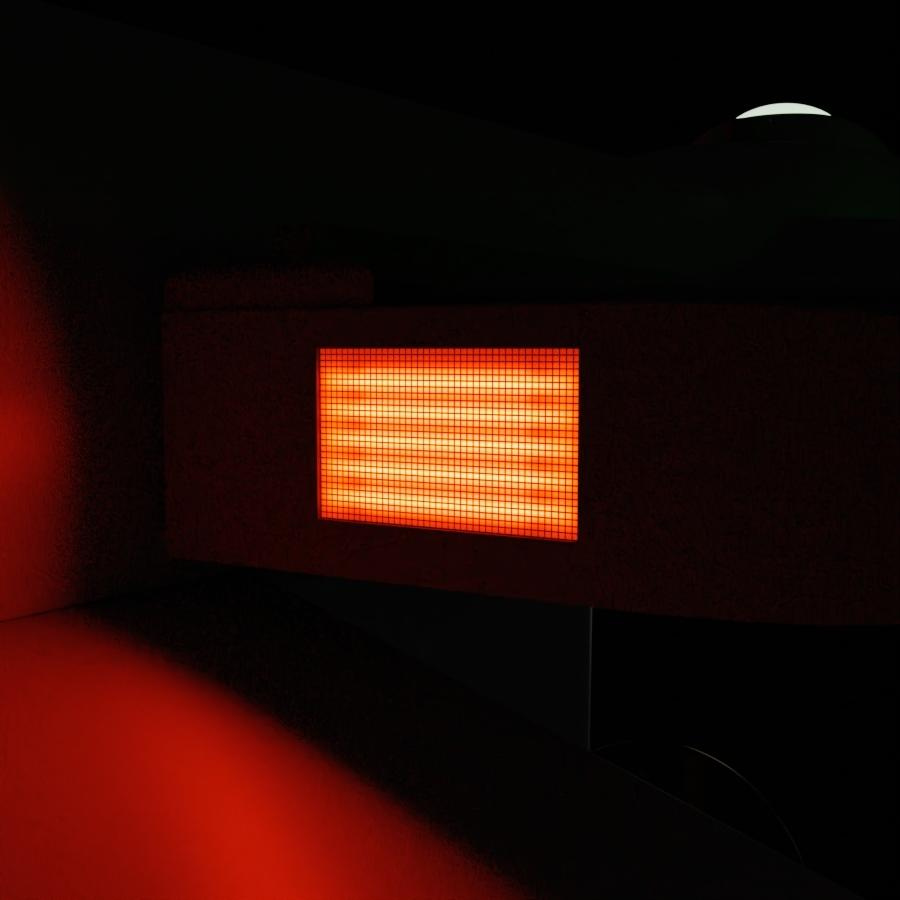 Good thing about this technique is that if you have enough space in front of it, you can change the brightness by how close you are to the translucent surface, which means you can animate the brightness with motion, either with shapekeys or changing position as opposed to lamp settings. The warp glowies are also angled faces.

Okay, so the Percheron class is a light cruiser, that most likely carries out the same missions and tasks as a Miranda class, but I don't intend it to be the class that was refit into the Miranda. I know artists have done TOS Mirandas, and that's fine, but I think the Miranda doesn't necessarily need be a refit of something else. The Percheron is a workhorse, and they are thus named after horse breeds (I have a list). The registry was going to start at 1680, but with around 22 ships that would hit the 1700 wall. I went with the 1600s thinking that when this design style was developed, ships smaller than the Constitution would be completed first. Though they could be subsequent to contracted Constitution classes. I'm not trying to find a place in fanfic registries were it could fit. Because it won't. Almost every number has been used. I do know it is close to the Axanar USS Ares' 1650, but I'm also not trying to fit into that fanfic branch of the Trek Universe.

The design has gone through some changes. First I had a proper BC deck, but there was this ugly intersection line between it and the extended engineering/shuttlebay fuselage. Rebuilt it to merge as one superstructure. There was also a half pill shaped engineering hull up against the bottom of the aft saucer to complete the shuttlebay because I needed somewhere reasonable for the pylons to extend from, but it looked like a dorky first pass of a very bad Ares class, and I did not want that. I got renders and will show them upon request. It did not look good behind the conical structure under the saucer, especially intersecting those three channels. In that version, the pylons were extremely raked back. I really didn't know what to do with the pylons when I killed the lower engineering hull, so I shot them up under the shuttlebay and connected them, but how are the plasma conduit going to work? Well, extrude that forward under the sensor pod fin, and shape to something sexy. I played around with deflector dishes on the pylons as I had done in the past, but it wasn't appealing. So just put it on a pod and hang it from the bottom. I tried it up top, but it didn't look good.