Hello again, sorry I don't use forums super regularly! At the start of the pandemic I started to make a Star Wars space battle animation and dropped off (old thread here). In the time since then I've gotten a lot better at a variety of things, and only my low poly TIE fighter model is really up to my current standards. That was also before Mandalorian Season 2 came out, so there's been lots of SW inspiration since.

So now I'm working on a new SW project: a narrated animation fairly inspired By ECHenry's ship videos (and Howard Day, Angelos Karderinis, Skyforge, and other talented SW fan artists work), just flying around and exploring a medium sized imperial ship, the Gladiator class Star Destroyer. So I've reigned in the complexity by taking away the space battle aspect and ramped up the amount of models needed. I've been working on a LOT of assets, making everything myself because I enjoy the modeling/texturing parts. So I'm going to dump a lot of stuff here and update periodically. Everything is WIP. The assets are all pretty low poly / realtime ready because my hardware's not great.

Animation will start with a lambda shuttle dropping out of hyperspace. I have a test animation of that. 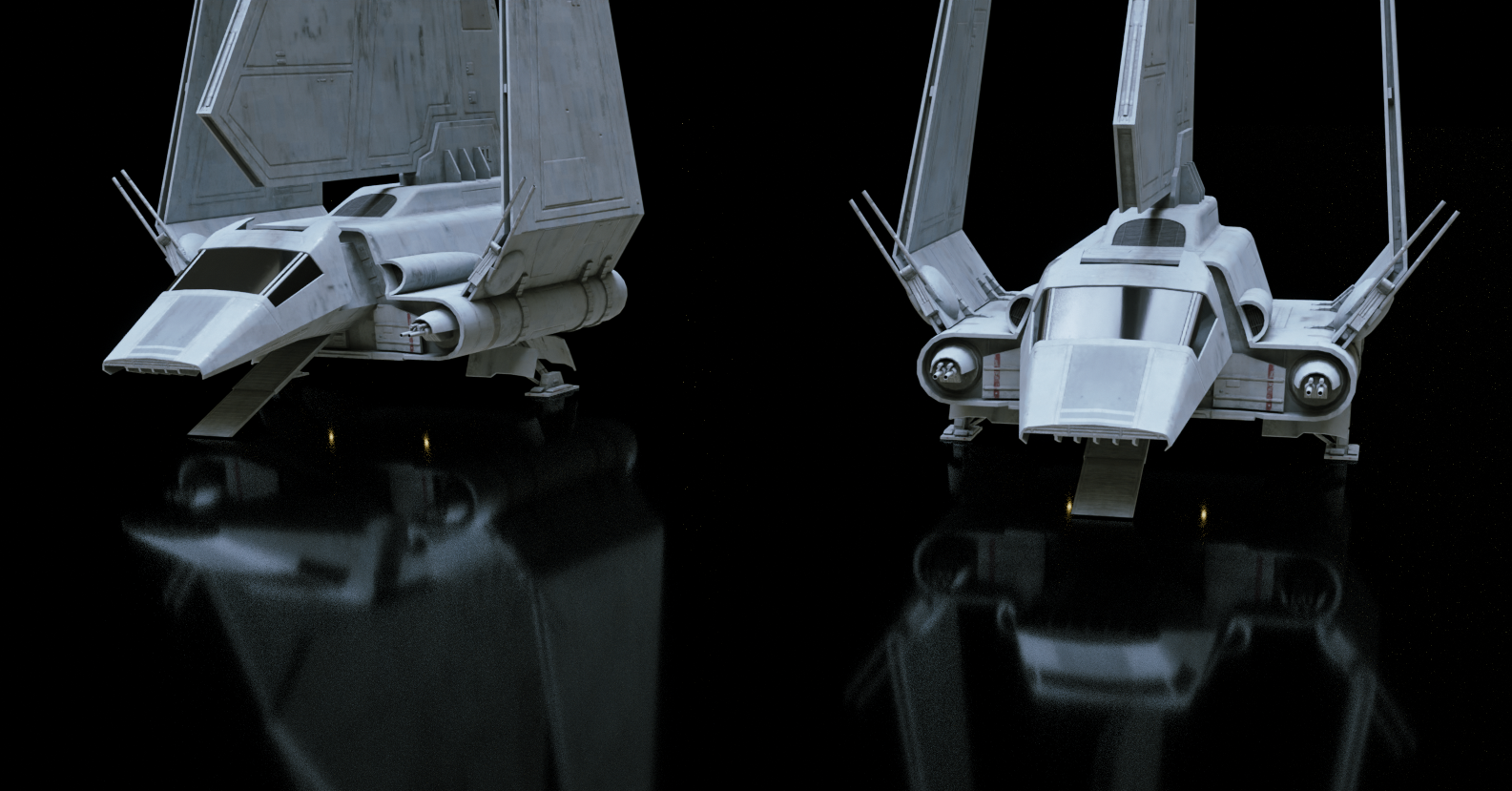 Some shots flying over the star destroyer... It's important to me that I can fly right into/out of the hangar without having to cut to a separate high detail model of just a small section of the ship, I like continuous shots.
The Gladiator class is a 600m long ship from the old '80s droids cartoon, recanonized through more recent appearances like the Armada game. I don't love their design for it and might take some cues from The Mandalorian's light cruiser. It's between that and a real star destroyer in size. I have only roughly blocked it out, and photobashed some possible ideas. The SD and light cruiser here are just official photos, not my models or anything.

The armada one has small hangars on the sides connected to the main flight deck, but the original cartoon version did not. Instead I will maybe add a very small hangar on the back for a TIE shuttle (the kind of ship Captain Needa took to the Executor in ESB. A fan design for it was canonized with the TIE Fighter Owner's Workshop Manual book that I'll mostly follow.)

We'll maybe fly over the bridge (I don't know if I want to do a detailed bridge interior because then I need realistic looking humans...) follow a TIE shuttle leaving that hangar, and also have a look inside a laser cannon gun deck in the side trench of the ship, based on the ones seen on the death star in ANH, with death star gunners and stormtroopers and a mouse droid. (the dirt here is also over the top and not well-placed)

I haven't finished the stormtrooper models yet but here's his blaster: 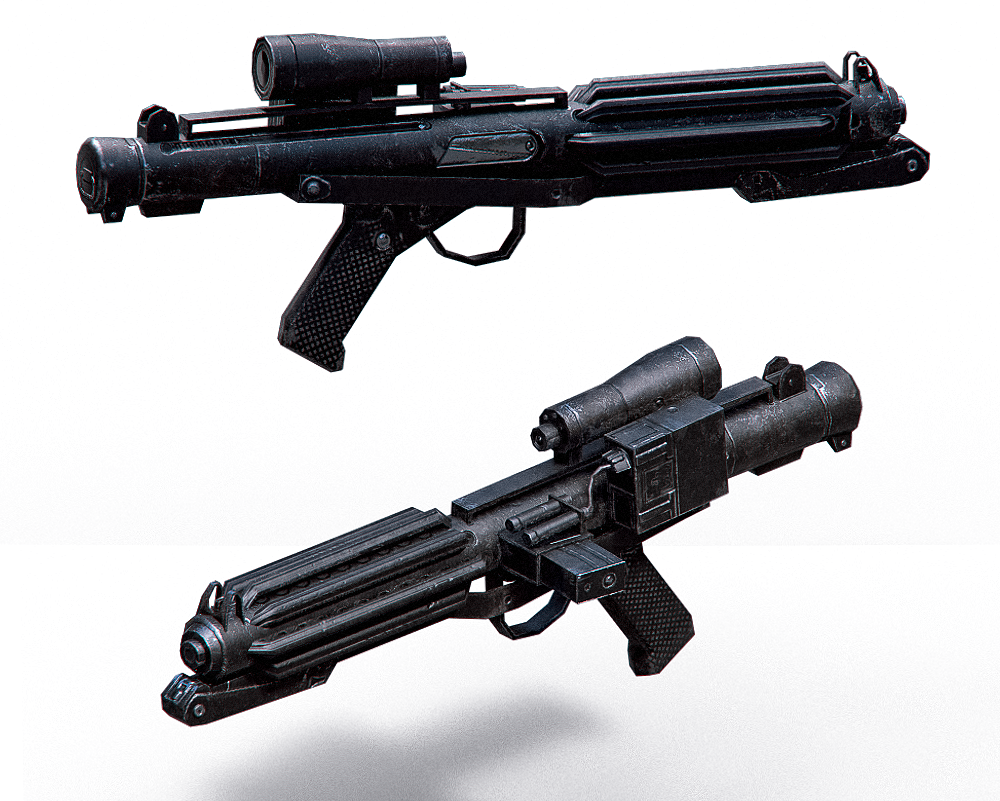 I may also have a local ship and a couple of alien crew members visiting. I feel like one of the benefits of the gladiator would be impressing remote systems with a hangar large enough to park your ship inside, as opposed to the arquitens light cruiser or many smaller ships where you have to dock with them. I've been working on some alien models so I may use one of those. And a couple R4 droid colorschemes, the two on the left are based on imperial astromechs seen in the movies on the death stars. 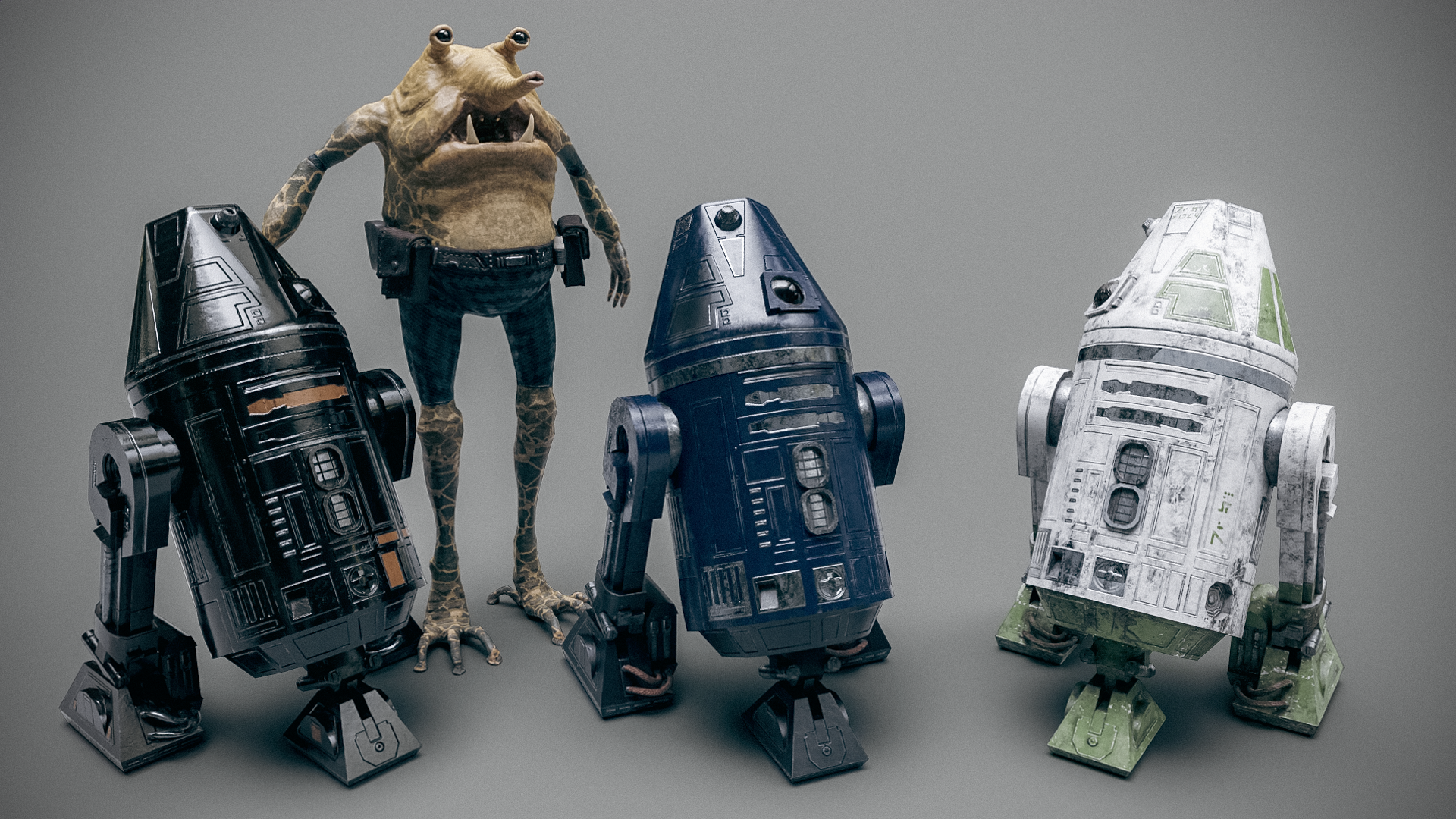 So... I have a lot of stuff done, but also a lot to go. And again, everything is very low poly, between like 1000 and 10,000 tris for each asset. Details are textured on in Substance Painter, primarily by drawing a height map and then using procedural layer masks, no modeling any panels. Not for any good reason, sometimes it would be faster to just model and bake a mask or bake a height map for some of this stuff. But I'm kind of enjoying this workflow, it's kind of simple and meditative and satisfying. (Except for that pa'lowick alien above with the droids, that was a somewhat high detail sculpt in Blender and then retopology in Maya. Haven't rigged it, don't know if I will use it for this.)

Sorry it's a big post, I'm basically just throwing every Star Wars thing I've got into one big scene. Hopefully something nice comes out of it!
Post edited by xiaorobear on April 2022