So many irons in the fire right now.

Anyway, this is a guiltless-pleasure (don't feel guilty about pleasurable things!) project that I've been tinkering with when trying to muster up the willpower to continue UV work on my Ambassador.

Story time!
As a kid, I had a bunch of toys. Often, I would play with these toys "as intended" -- X-men would be X-men fighting evil mutants, Star Trek micromachines would fight space battles against other Star Trek micromachines, and so on. But sometimes, I liked to repurpose the toys into something original. That gave birth to the Defender universe. Using aforementioned micromachines, coupled with a handful of other larger toys, I concocted huge space battles between the heroic UEDF and their genocidal alien enemies.

Always at the center of the chaos was the UEDF Illustrious Defender, which was originally an old StarCom toy called Starbase Station. The toy itself was actually intended as a vertically-oriented, multi-level play set for the StarCom toy line, but if you detached the middle level, removed the base-level's gun turret, and flattened the whole thing out, it looked something like a large spaceship, especially compared with the other micromachines in question.

Over the years, I've taken several stabs at modeling Defender, using the original toy as a real-world reference. I made my first attempt in trueSpace, which accurately captured the original shape but lacked a lot of the toy's surface detail. My second attempt, done in LightWave (or it might've been Inspire), kept the overall shape intact, but retooled a lot of the details to make it a more original piece. My third attempt, also done in LightWave, went back to the idea of doing an accurate detail capture, this time with a lot more surface detail. This marks my fourth attempt, done in Blender, which continues to attempt the accurate detail capture, but with an eye toward the end goal of representing the toy as a massive starship. To that end, I'm modifying the details here and there to bulk out shapes, depict armaments, and so on. I've got a nice set of digital calipers for measuring things, so this should also be the most accurate version (excepting the bits I'm deliberately changing) I've ever done.

Enough with the background, on with the model! I call the front section the "Gun Head," since it houses the enormous main railguns and, if you think of Defender as resembling a giant banjo, it's where the "machine head" would be. I repurposed the design of the toy's middle platform's guns to be smaller turrets and placed them on raised daises that house clips for the top-side's magnetic plate on the toy. This time around, rather than mounting the guns on top as I have in the past, I decided to mount them beneath, That detailing along the edge is an accurate capture of the same detailing on the toy, as close as I could make it. I elected to treat a couple of the toy's flat decal colors as physical objects, namely the three round observation towers.

I need to put a bunch of windows and smaller machinery in to give it a better sense of scale, but I think I'm going to come back and do that once the rest of the major shapes are in place. 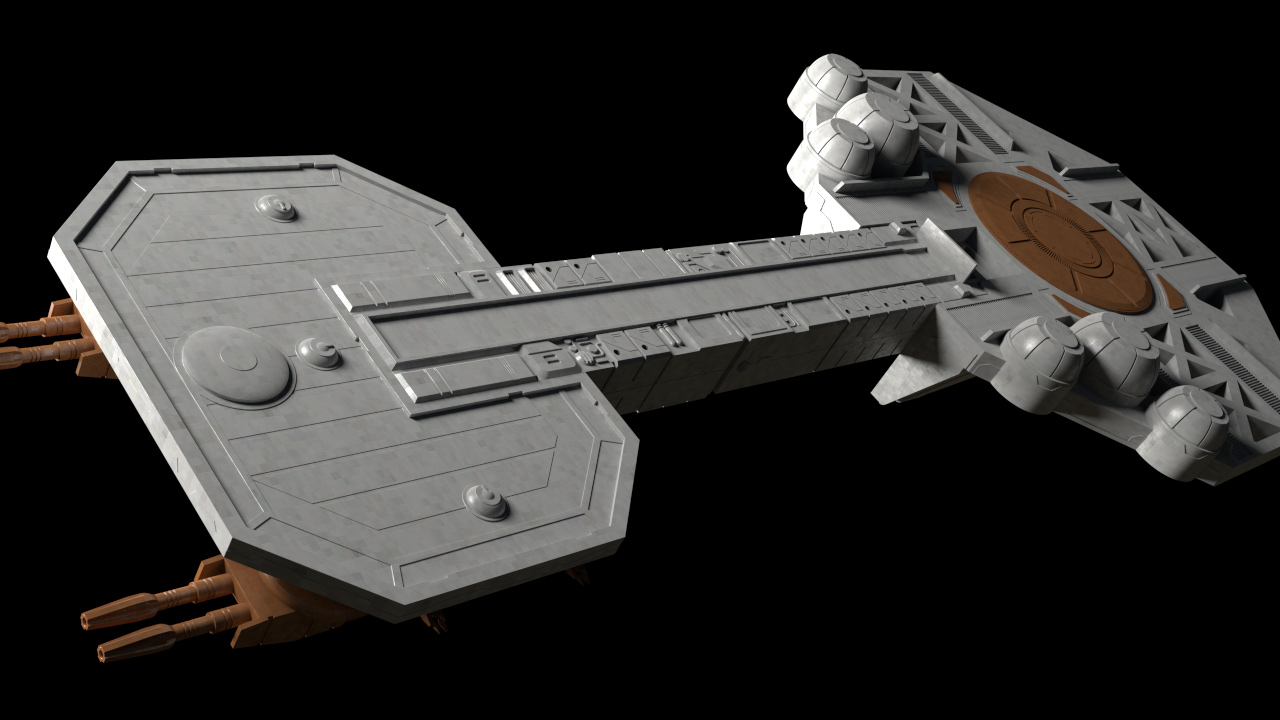