So, in my continuing desire to rid my living space of clutter, and to actually start building some more of the model kits I have stashed in my closet, taking up space and collecting dust, I've decided to build yet another of the DS9 Dominion War kitbashes - this time, the ship that is likely the single most conservative of them all - the Antares-Class ship, which is basically a stock Miranda-Class ship, with some Excelsior-Class bits and the stand slapped onto it, the stand acting as a Nebula-esque equipment pod. My ship will be named the U.S.S. Litvyak, after the first female fighter pilot to shoot down an enemy aircraft. I've already ordered custom registry decals for the build.

Because we saw so many Antares-Class ships in the background in DS9 episodes, I'm going to operate under the assumption that they were pretty established within the fleet already, probably as a peacetime vessel, and that the existing ones were brought up to modern spec, while new ones were quickly built. Because of this, I'm going to use the same color scheme that Micro-Machines used on their Reliant miniature (as well as their Excelsior miniature), which had the hull the same TNG "duck egg blue" color as the Enterprise-D. I'll most likely be using the TNG-era Starfleet arrowheads and pennants on the model. I'm going to gather all the parts I need tomorrow, and start my prep for priming, so that all the plastic is unified, color-wise. I'll post the first WIP images once construction has begun. For now, here are a couple pics of the actual filming model, for those who are unfamiliar with the Antares-Class. 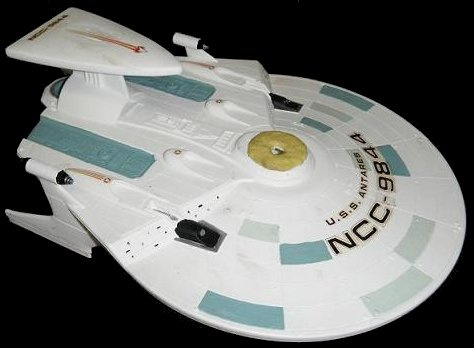 The original filming model was built by Adam Buckner.