My goal here was to do a no-thrills, no-frills simple design set in the aforementioned time frame that would fit into the Jefferies' aesthetic, and to avoid embellishing it with my own let-me-see-if-I-can-make-it-more-realistic ideas. I used Charles Casimiro's blueprints for guidance. Yes, there is a Miranda/Stargazer/Centaur look about it, not that this is meant to be in that lineage. The saucer is just shy of 90 meters in diameter, and 8 meters at the sidewall to be congruent with the TOS Enterprise. The nacelles do not share the same scale and are just what looked right.

I wanted saucer separation ability, with the saucer as lifeboat/landing craft, the bottom being a heat shield with the lower sensor platform able to be jettisoned. I don't know if I'll keep the heat shield idea because as a heat shield, I'm loathe to make any openings in the mold line.

The impulse engines are just a stand-in, just emitting circles. And I so badly want to put details in that nacelle inset, but alas none existed for, I believe, The Cage model, which Casimiro notes as the First Pilot in his prints. I'm staying true to that.

Twin deflectors/long range scanners in pylon pods. I didn't want to hang a D/LRS off the saucer, or perch it above the saucer, or hang it under the Engineering Hull in the way of the core jettison plate, so the pylons were the only place left, giving it a vintage bomber look. The nose of the pod is a swappable module.

In the forward, lower corners of the Engineering Hull are phaser bank pods, and I'll render close-ups of those later.

I thought this ship might carry at the most three shuttlecraft (who knew there was so much conjecture and controversy over the dimensions?), and thought I might go with a upper hatch and the launching shuttle raised by an elevator. However, I kept in mind the radial bulkheads (going so far as to model dividers every 22.5 degrees), and found the only solution would be a tiny hatch at the saucer rim, and I did not want to do that. The other option was at the sidewall, hence those doors, which are not unlike some aircraft hangar doors. I thought about Boolean differencing the inset, but decided to extrude faces instead, and the option to forego the subdivision smoothing because creasing the edges afterward gave unsightly effects. It looks okay anyway. I have not put doors on the starboard side, but I may for symmetry as a cargo loading door.

I need to add the grills to the pylons, and I want to add detail to the Engineering Hull, and see if booleaning some windows doesn't cause a goddamned mess. The nacelle booleaned inset came out great.

Oh, and that weirdness in the Bussard cap is caused by the Fresnel in my nodes. I'm using the refractive index of diamond, but it looked the same in plexiglass. Could the reflectivity of the internal cage. Or its an effect of the caustics. And I do plan to fix the nav lights after I place some more.

Name, registry, mission, and history? Haven't thought of it, might not, just concerned with the design elements so far. 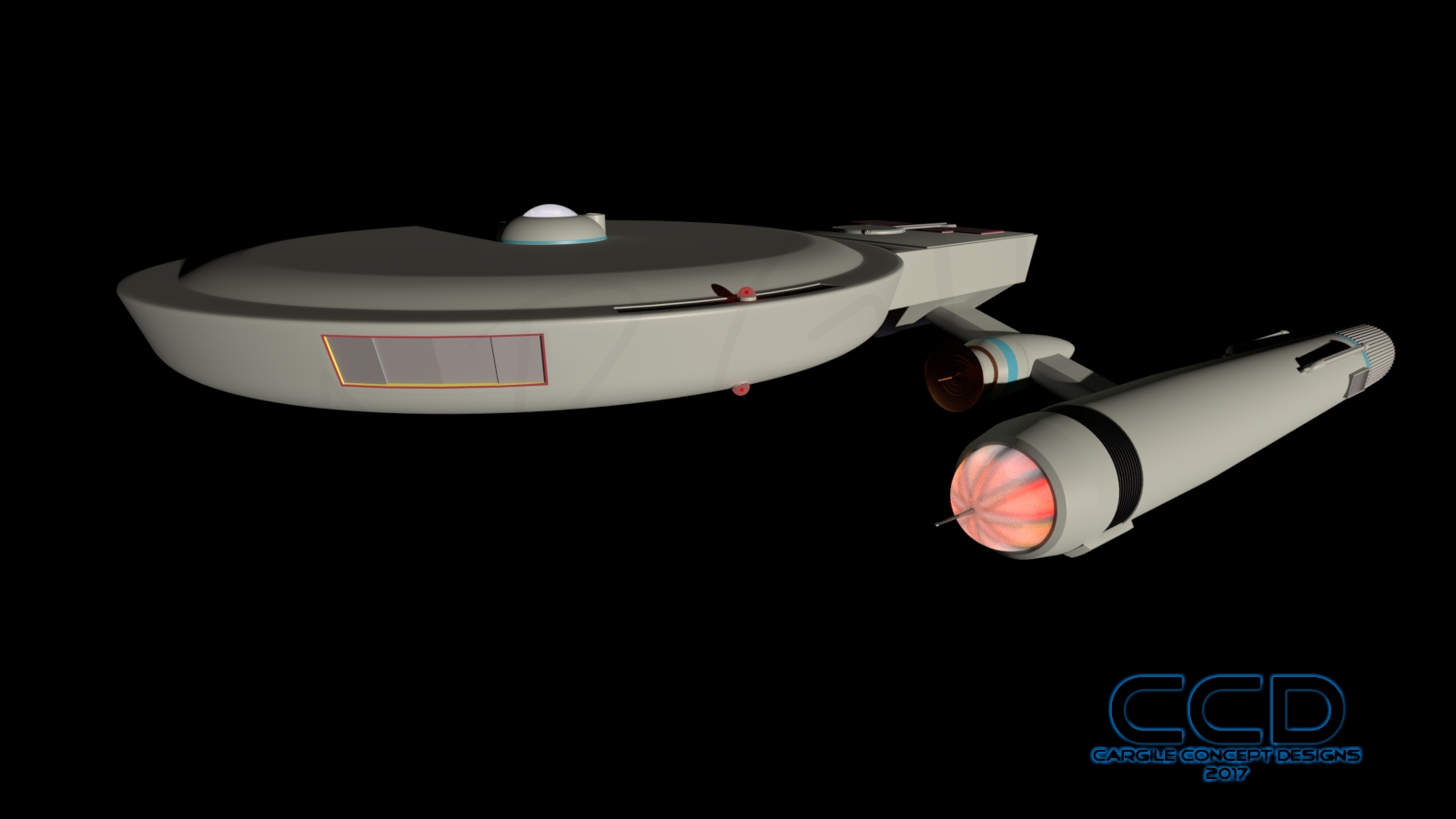