Yes! After a long run-up I'm finally ready to show you the next mad, mad project. This time a physical model that will receive full modeling, painting and weathering treatment. It's a large scale Space Marine from Forgeworld. Since it's a very detailed and expensive model I'm not taking this lightly. Over the past few weeks I've been slowly prepping the model and the last bits just came today, which are some separate etched brass icons to further enhance the model.
I also did some preliminary paintbrush testing on a piece of cardboard and some advanced weathering tests on a half-painted Dreadnought model that had been gathering since 3 or 4 years. I noticed that for future model shots, I'll have to set up some sort of light box or just block off any direct sunlight with white paper to allow for translucency but no glare.

So here are some pics.

First off: the gathered materials. In the background you can also see my PC used for my 3D madness.

Second some shots of my test-cardboard, the yellow technique will be used for one shoulder pad, the red for the rest of the marine.

And third, some shots of the new-style dreadnoughts I have painted over the past 15 years or so.
The first is the original model as they first came out, so god knows how old it is...

Second is a heavily converted one I made around 10 years ago, the left arm is fully converted. +-10 or 12 years old

The third is the most recent (metal) model and is still being finished. (hence the masking tape). +-4 years old, just been weathering it since a week or three (slowly). 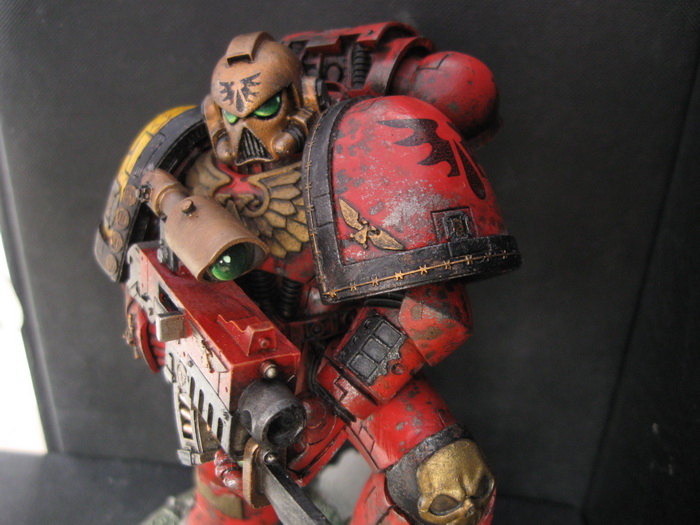