Practical1/700 and 1/350 scale HMS Fearless from the Honorverse

So... I haven't been here in awhile. Some of you may remember years ago that I posted renders I had done of ships from the Honorverse, David Weber's Honor Harrington series of books. Since then, I haven't really done much modeling, except some detail work to add to my previous works to update them. I don't recall if I mentioned this before, but I am a member of BuNine, a group of Honorverse fans who work directly with Weber to add additional background detail to his universe. We have real life former Air Force, Army, and Navy personnel, lawyers, heraldry experts, 2D and 3D artists, and so on, and we all draw on our own knowledge to round out stuff that David hasn't put in his books. We all collaborated on the compendium portion of House of Steel, a book containing a novella by David and art and technical information on ships, political and military organization, etc.

Almost a year ago, I finally decided that I wanted to do something more than just create meshes in Blender, so I bought a Snapmaker 3-in-1 3D printer, laser engraver/cutter, and CNC. While it worked, it was very limited in what I wanted to do with it, so I boxed it back up and put it away, then bought an Ender 3. Much better. Modded the heck out of it by upgrading the mainboard, power supply, silent fans, dual gear extruder, and many printed mods to make it work better/look nicer.

This is what came out of it: 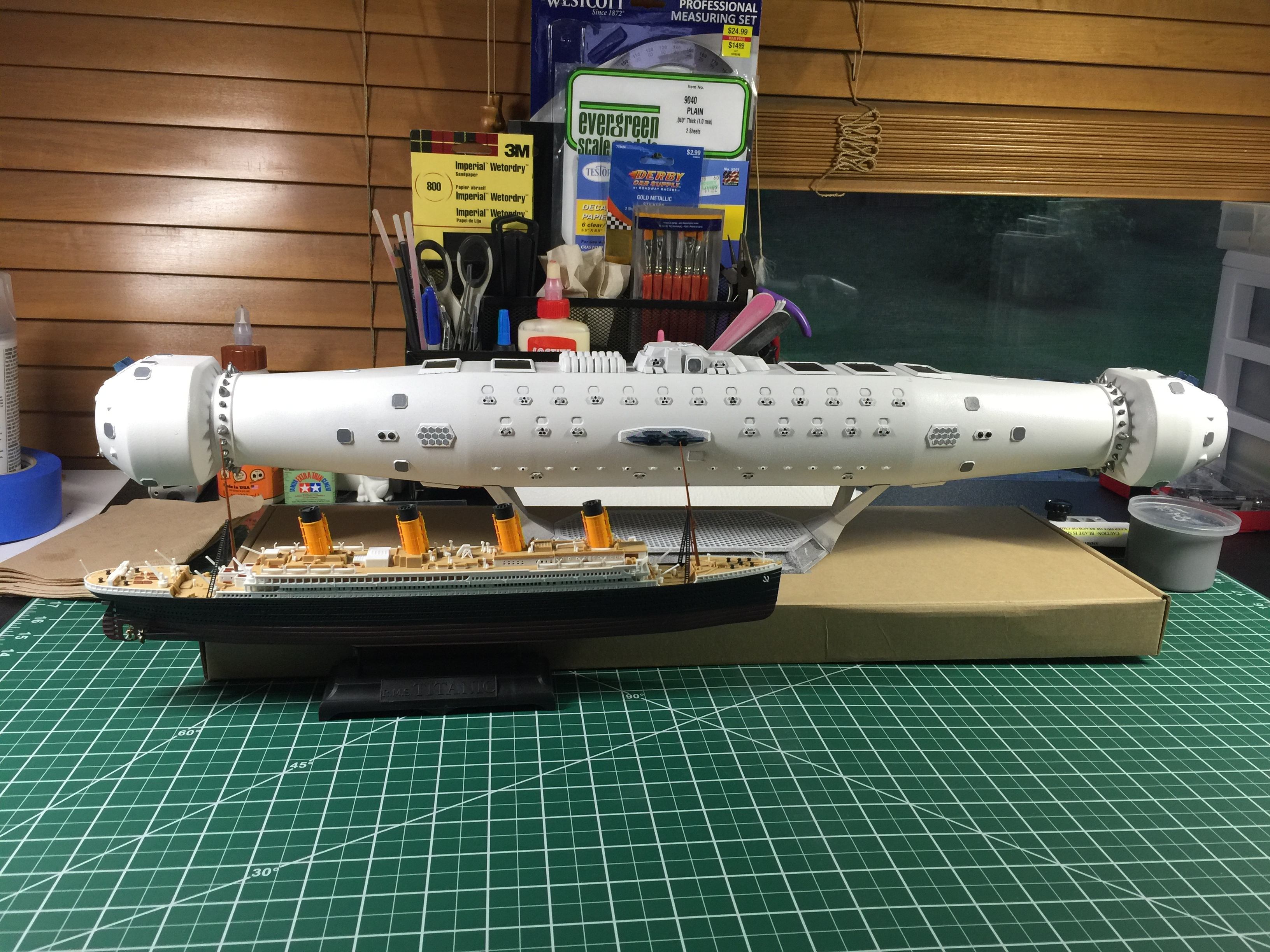 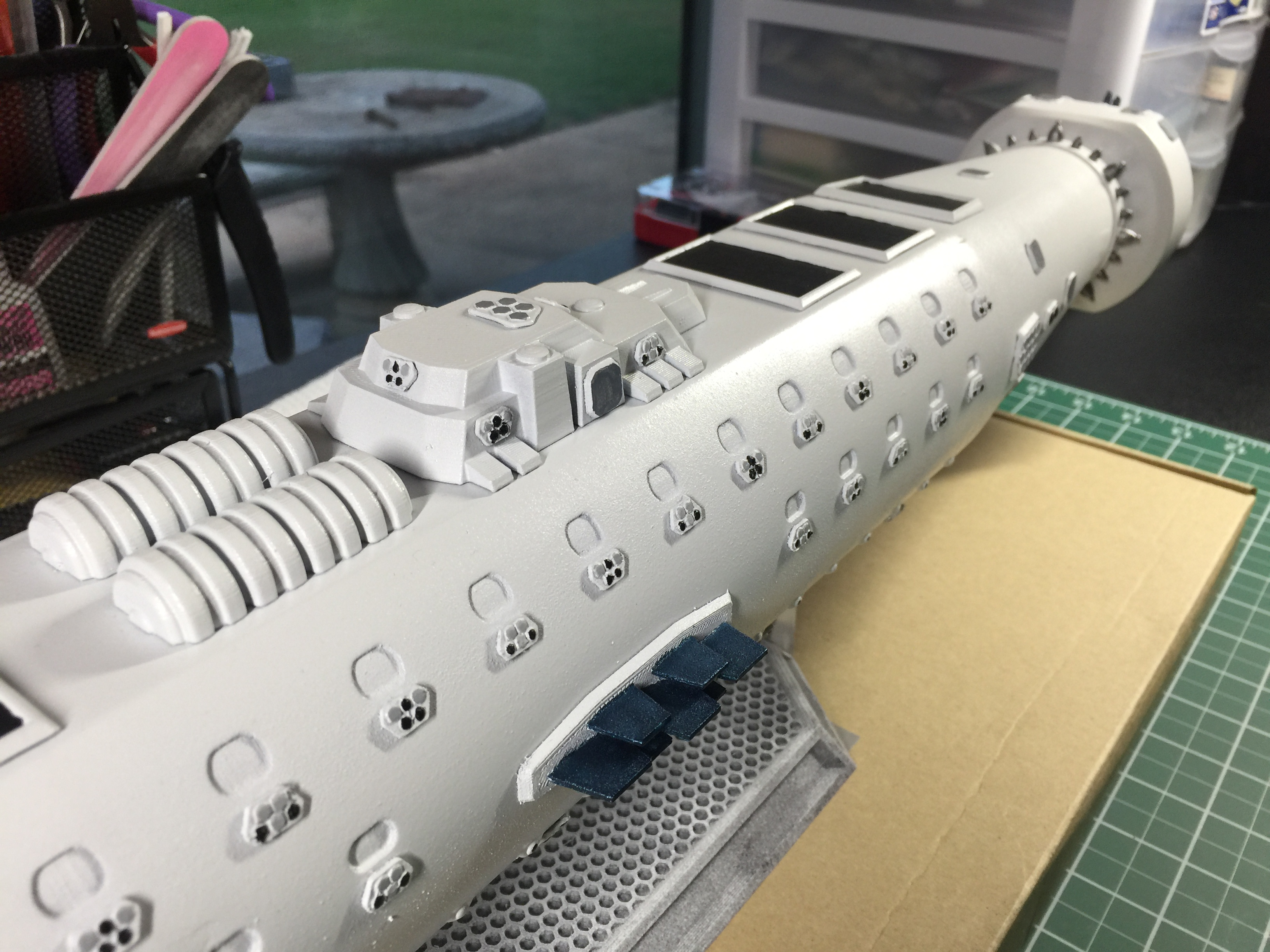 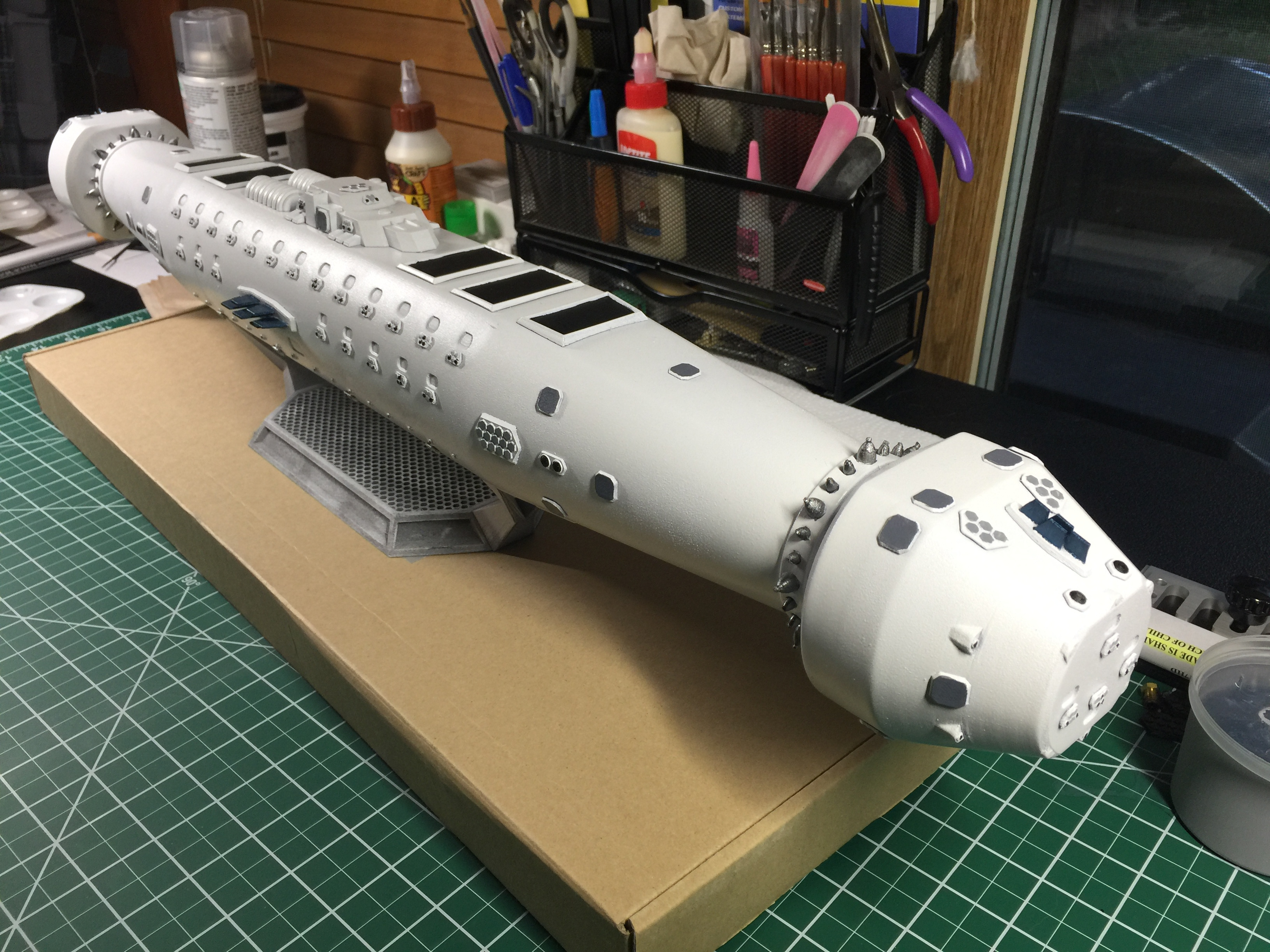 The ship is the HMS Fearless (a Star Knight-class heavy cruiser) from the second Honorverse novel, The Honor of the Queen. The scale is 1/700, the same as the Titanic kit in front of it. The model is 99.9% 3D printed, with just the grav sensor array blades being sheet styrene. Spray painted with Rustoleum primer (several coats) and semi-gloss white, with hand-painted details. It's 75cm long or around 29 inches.

Of course, that wasn't enough, and the idea of using real-world ships to help show scale (as I did with the Titanic) appealed to me. So I created a 1/350 scale Fearless, with a bit more detail: 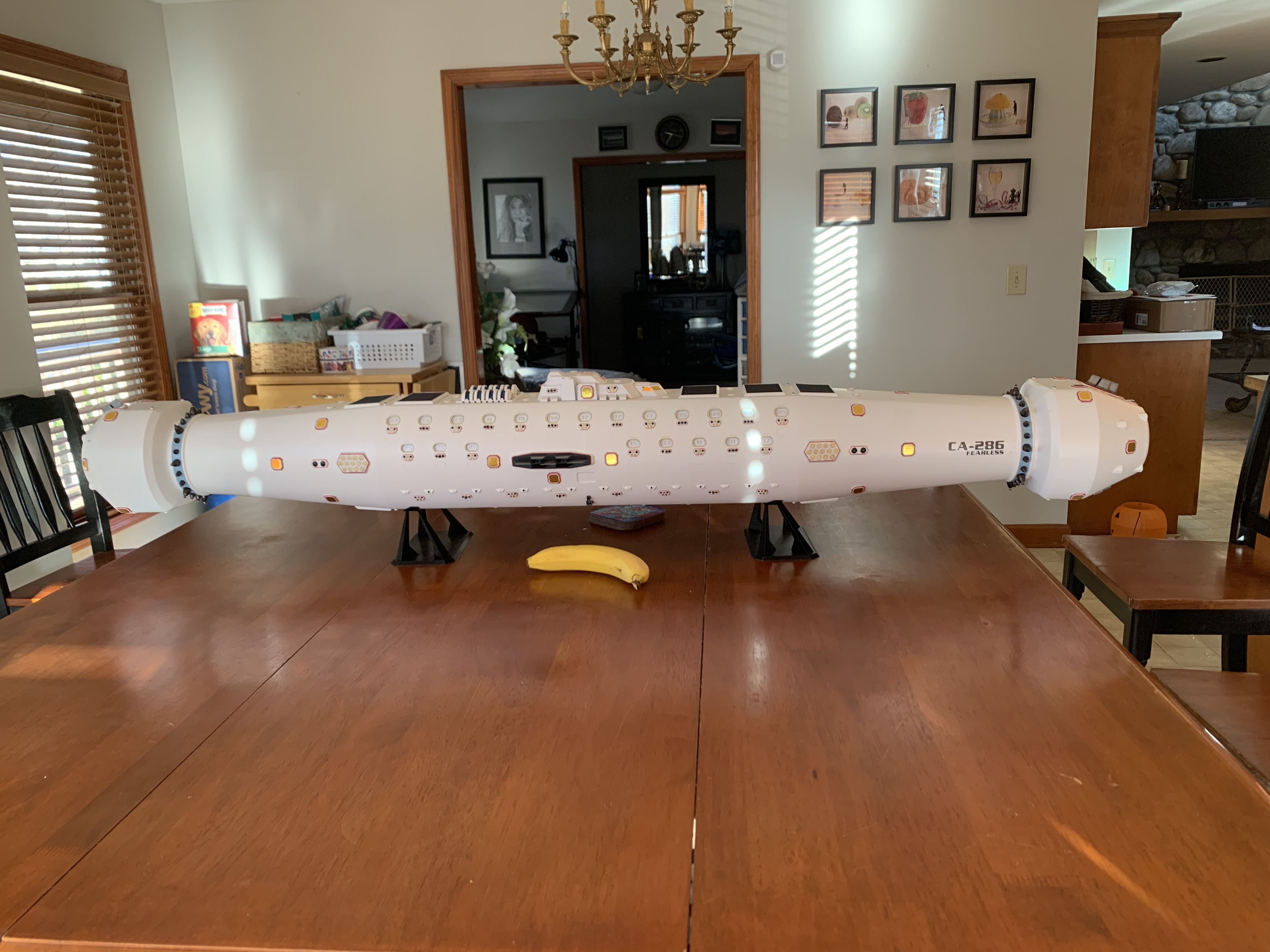 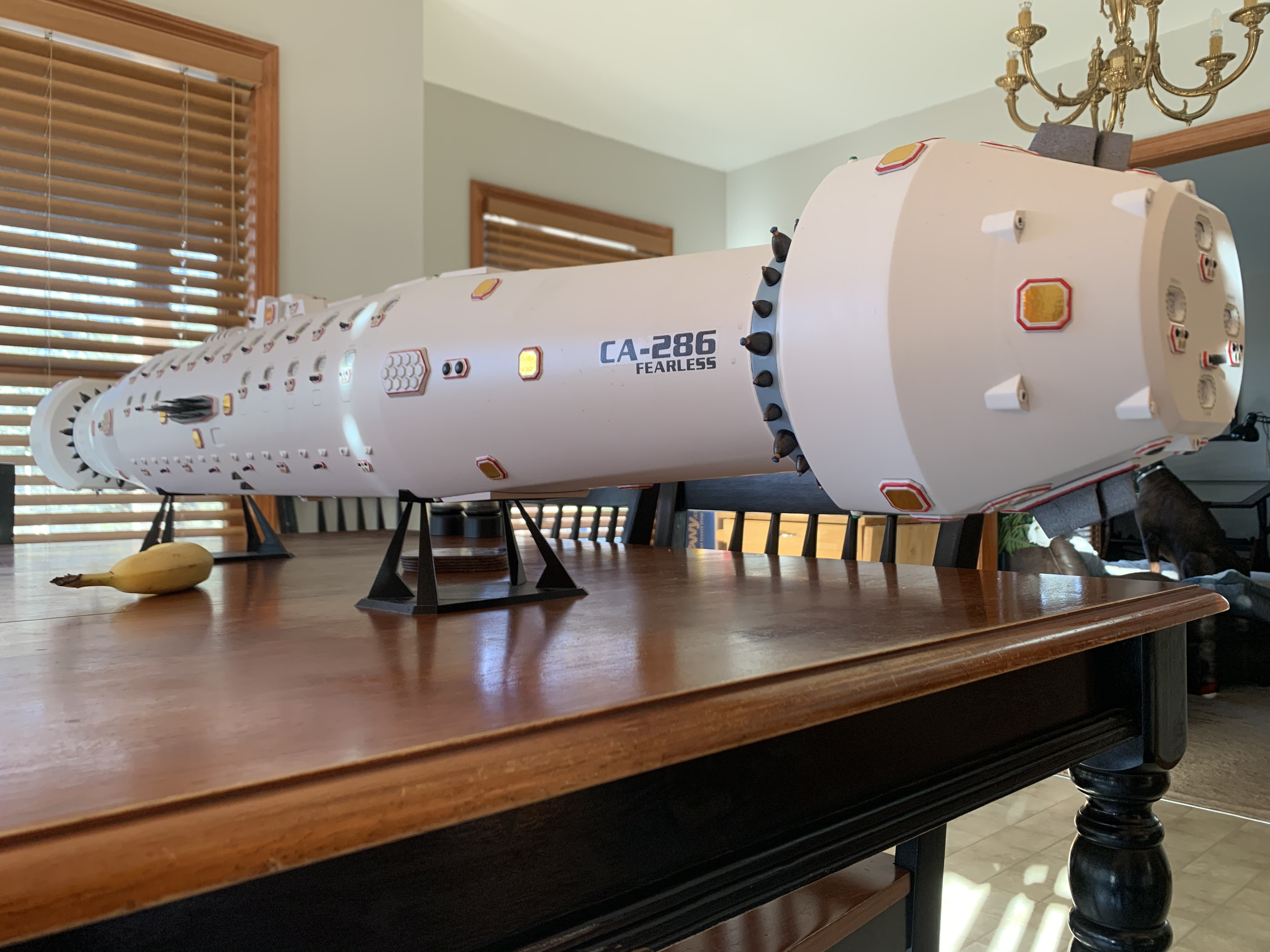 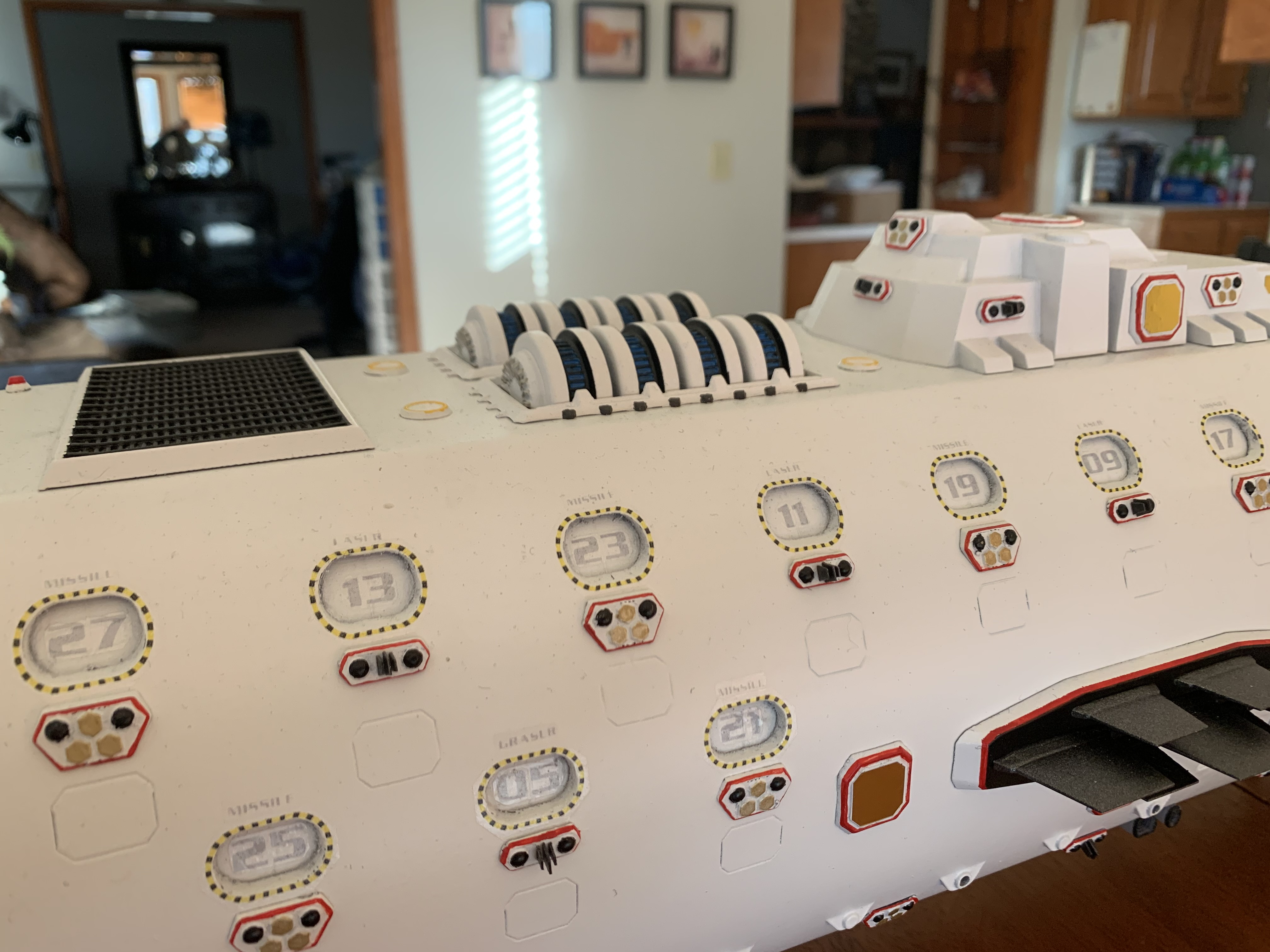 Unfortunately, I haven't bought a 1/350 scale ship model (yet - maybe a Tamiya USS Enterprise, or Trumpeter USS Nimitz carrier) to compare it to, so I included a banana. This model is 150cm long, or about 58.5 inches. It is 100% 3D printed, primered and sprayed with Rustoleum again, and hand-painted fine detail (I finally have an airbrush, but haven't used it yet. Decals were created by me and printed on my inkjet using Testor's decal paper.

He doesn't know it yet, but David Weber will be receiving the 1/350 scale model from me soon. I only live a 30-minute drive from him, and will be giving it to him once the weather warms up a bit and we're sure he's recovered from the 'rona. I'll build another one for myself, possibly lighting it, but that won't be until after I finish my currently-in-progress next project. I won't say what it is, but here's a hint: I have a Trumpeter 1/200 scale USS Iowa battleship in progress, and have just bought an Ender 5 Plus, which I'm currently modding and dialing in settings for.