A project that's actually little over 4 month in the making already but it slipped my mind to also post it here over at SFM. But have no fear! I'll copy/paste my progress here to bring it up to date and continue then in real-time, Jack Bauer style.


So here goes, the biggy of the army, a Land Raider Crusader to ferry the Captain, Reclusiarch and Sanguinary priest (all in termy armour), plus their body guard of a 5-man close combat Terminator Squad.

It's lightly converted with the Forgeworld BA doors and some Dremel'ed and remodeled battle damage. i also used some extra resin and etched brass details here and there.

Funny thing how regular thin masking tape is exactly the same with as Land Raider tracks. ^^

It took quite a few hours to assemble properly actually. The plan is to use the weathering skills learned with my big Marine on this vehicle so no rush, patience is the key.

First steps after assembly, a black undercoat and a base coat of roughly 50/50 Mechadendrite Red and blood red, mixed with some Vallejo airbrush thinner and a little bit of Klear to give some strength to the paint. That GW paint gun is a lovely tool to apply base coats. No tricky mechanics to clean afterwards... 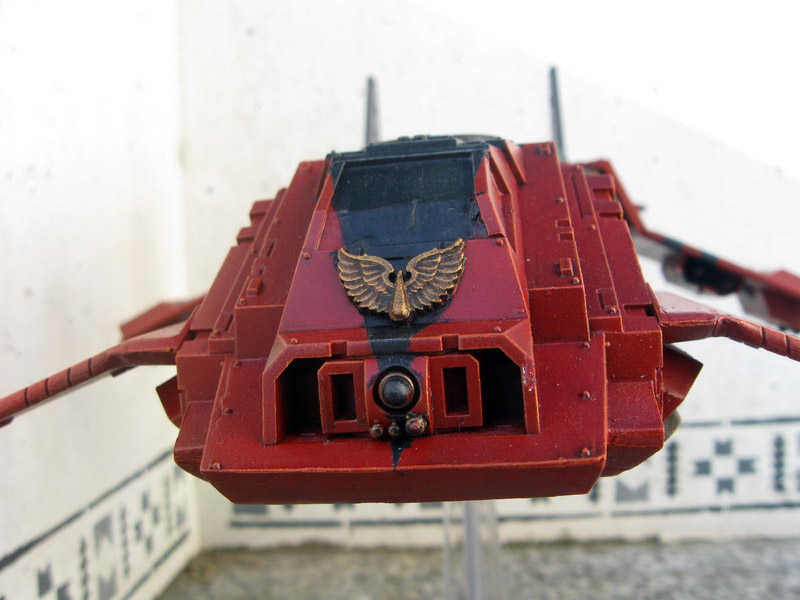