Okay, about time I revealed to you guys that I'm not dead and nor am I wasting my summer not doing any building. I'll have you know between decoration, partying and work, I've been very busy modelling, just not modelling on a computer for once!

This 'ere, is an old Epic Leviathan, courtesy of the Imperial Guard.

Several people have now built one, though back when I started (I kinda took a 30 month sabbatical from it!) nobody had done such a thing. There I was thinking, muha hah haaa... They'd probably say this is impossible but meh, I'll go ape and make one.

I'd seen bigger models, but I wanted big -and- detailed.

Okay, for those of you true fans who remember the old beast, I must admit one thing to you. 4 years ago you couldn't find a picture of this thing anywhere. I remembered what it looked like, but in terms of scale, I couldn't remember.

The most important thing to top that caveat off with, is the fact that I didn't want to just recreate the model. No, not me, I wanted to REIMAGINE it!

So, This is what I think the Leviathan -should- have looked like... And the additional features of my tank shall be revealed as we go! 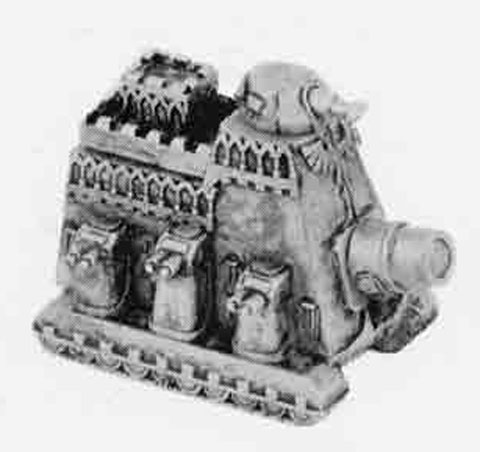