3DThe Meshes of the Daleks 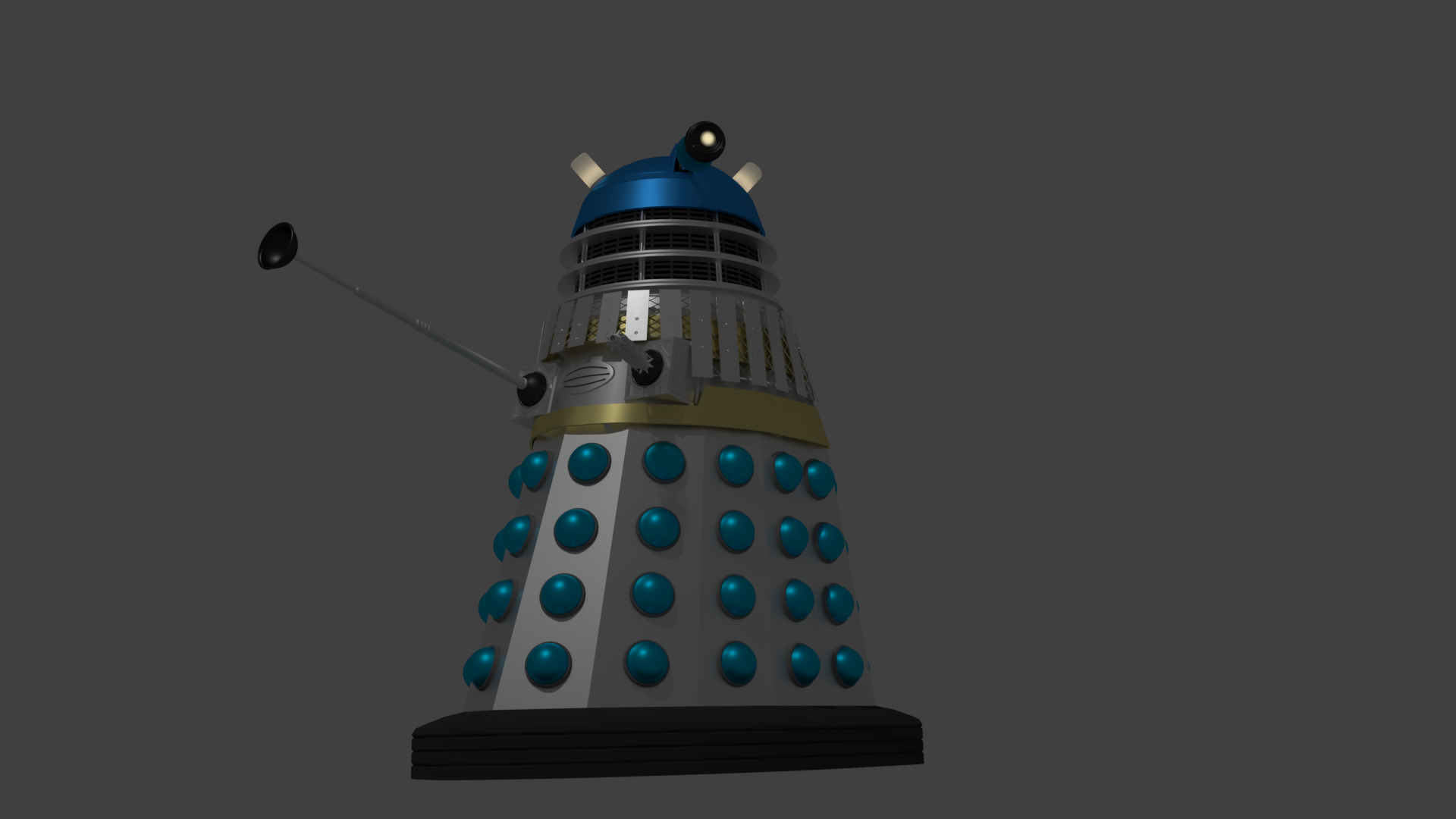 So, I re-watched the first Cushing movie a while ago, and that has put me on a bit of a Dalek binge, and I decided to create a Dalek designed to my own particular tastes.

So the first thing was that I wanted this to be a design I could put next to an NSD and have it feel just as real, but I wanted to move a little away from the solid tanky feel. I love the NSD, don't get me wrong, but I feel Daleks work best as a high tech alien look, sleek in the right places but fragile in others.

I also like my Daleks to have character and personality, so the colourful Cushing Daleks are a good starting point, though I will likely create more monochrome variants as well. 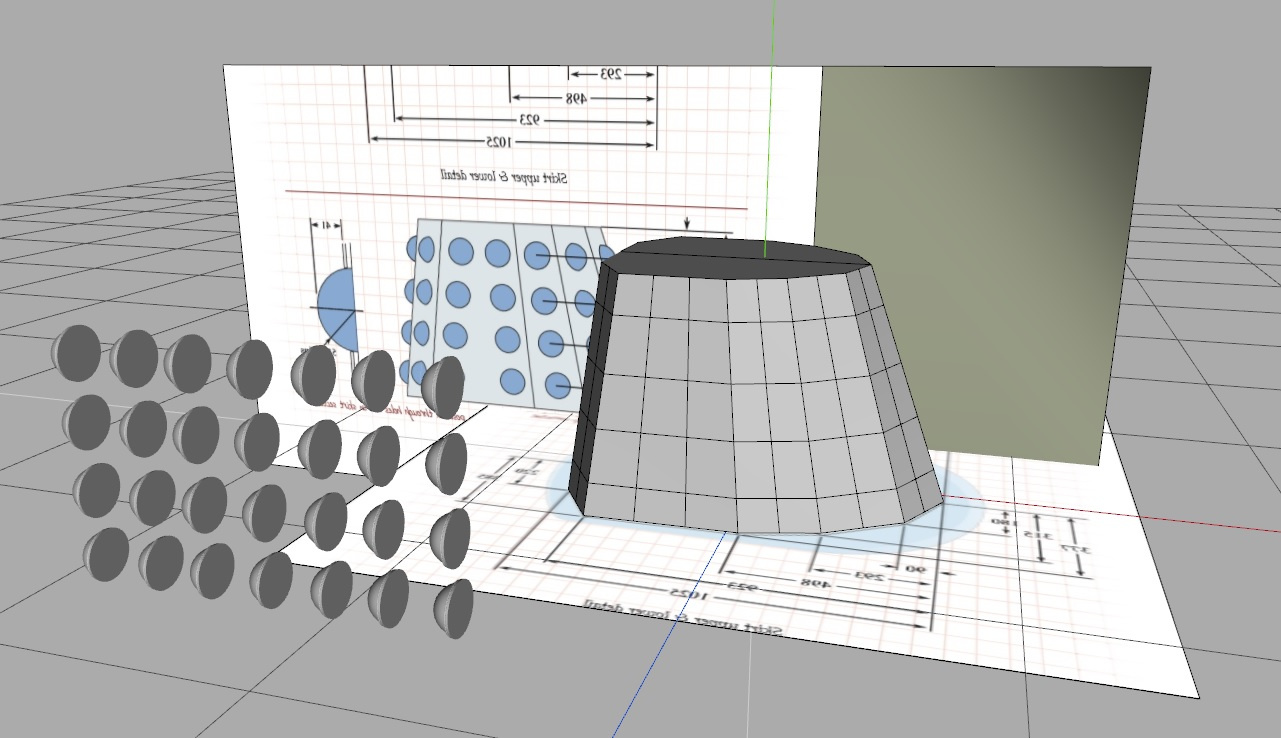 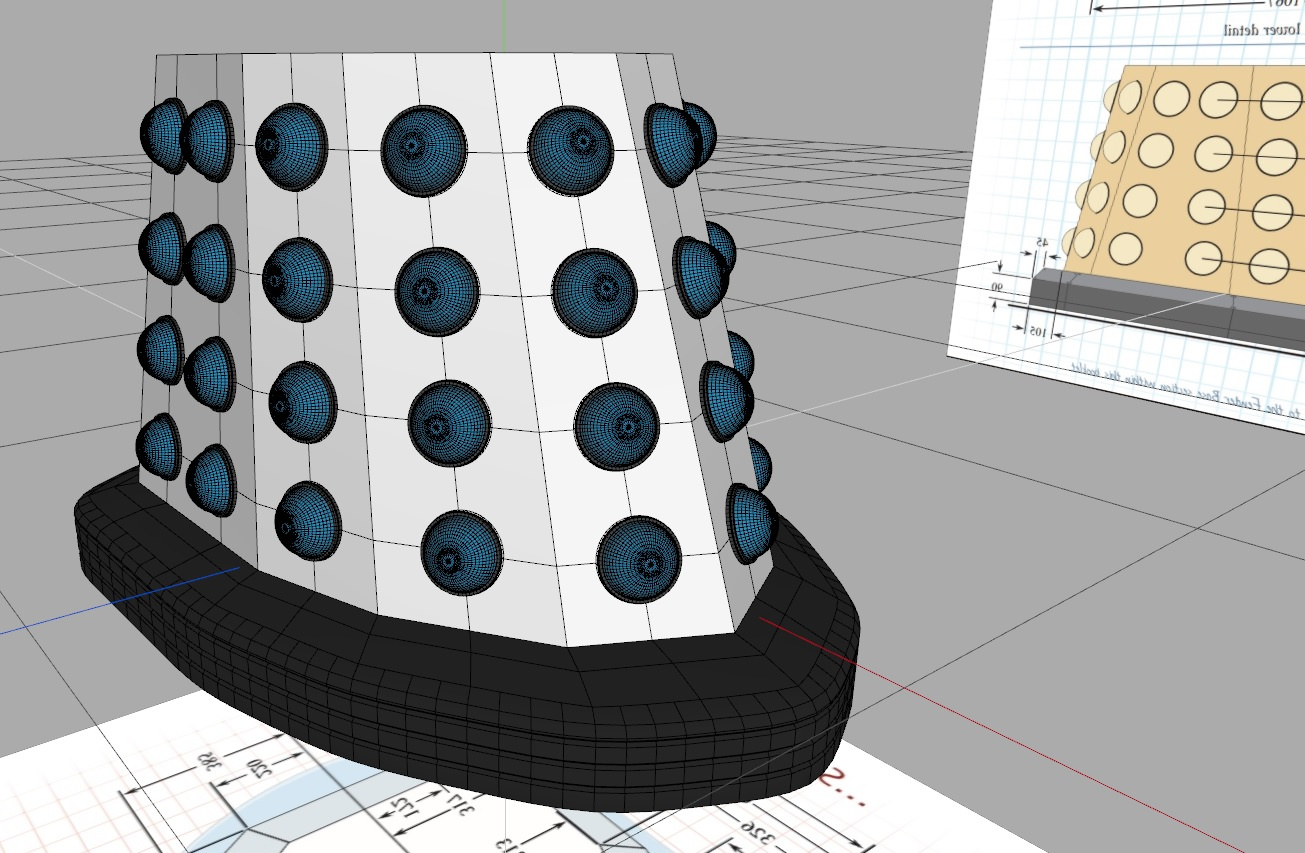 Starting with the fender, I liked the pointed look of the NSD style, and its very natural to extend the shape of the skirt (I'm actually shocked it took as long as it did for someone to do that), but it was a little too blocky for the feel I wanted. While the Cushing/DIOE/NDP fenders just look tacked on. The solution was to start with an NSD angular one and smooth out the corners to give it a sleeker look. IIRC I got the idea for a groove from LibrarianBot's excellent work on Deviant art, but I added more to give it that feeling of detail without resorting to nuts and bolts. Grooves ended up being a recurring detail on this design, convenient as it lends it a bit of design continuity between the different pieces, and also was really easy to model. 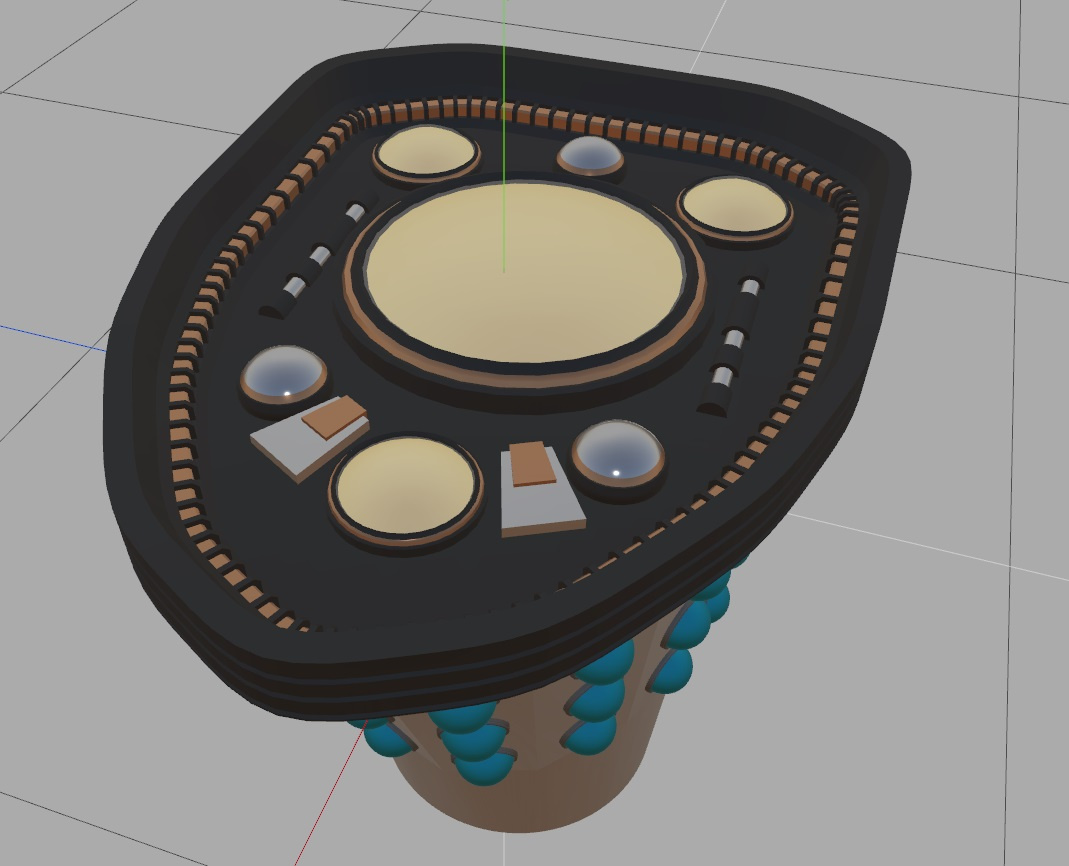 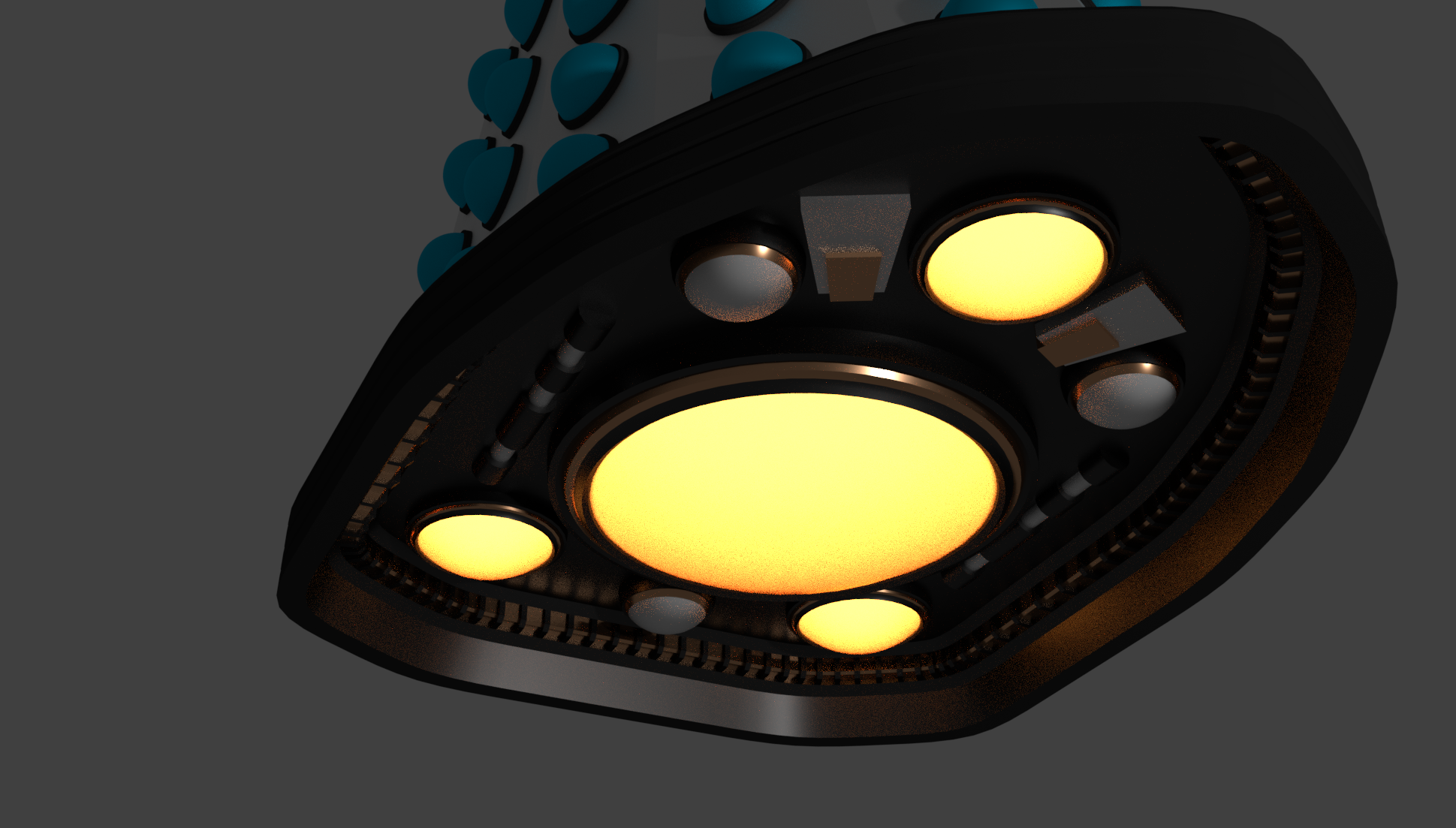 The underside obviously owes a lot of its look to the NSD ﻿and Mechmaster's designs. I decided I quite liked the softer creamy yellow rather than the bright blue or Mechmaster's dull orangey-red colours. Something about this feels fitting for a 60's styled design, and I decided to keep that colour for the ear bulbs and eye﻿﻿﻿. 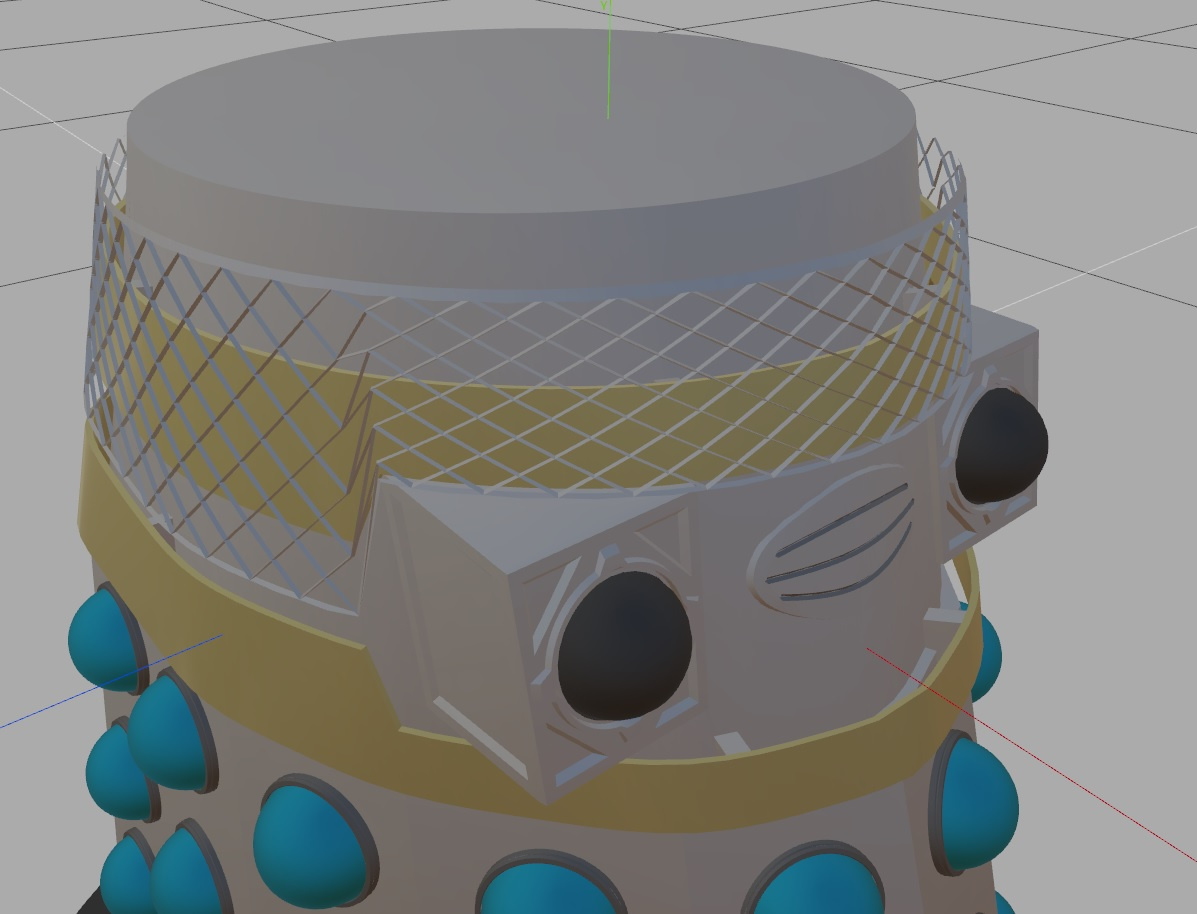 One of the things I wanted to test out was keeping the gold collars from the first movie, but still adding the slats - rather than going monochrome like the second movie, which imo made all the daleks look bland by comparison.


I would love to say I intentionally made the mesh have bigger holes in order to better show off this layering, and while thats partly true I also didn't look at reference pictures and forgot how fine the mesh in the show was.

However I do think the end result works quite nicely - was a pain to model though, and strictly speaking its a bit wrong - the model has no back faces to the mesh's...well, mesh. However since that can't really be seen, I don't care. 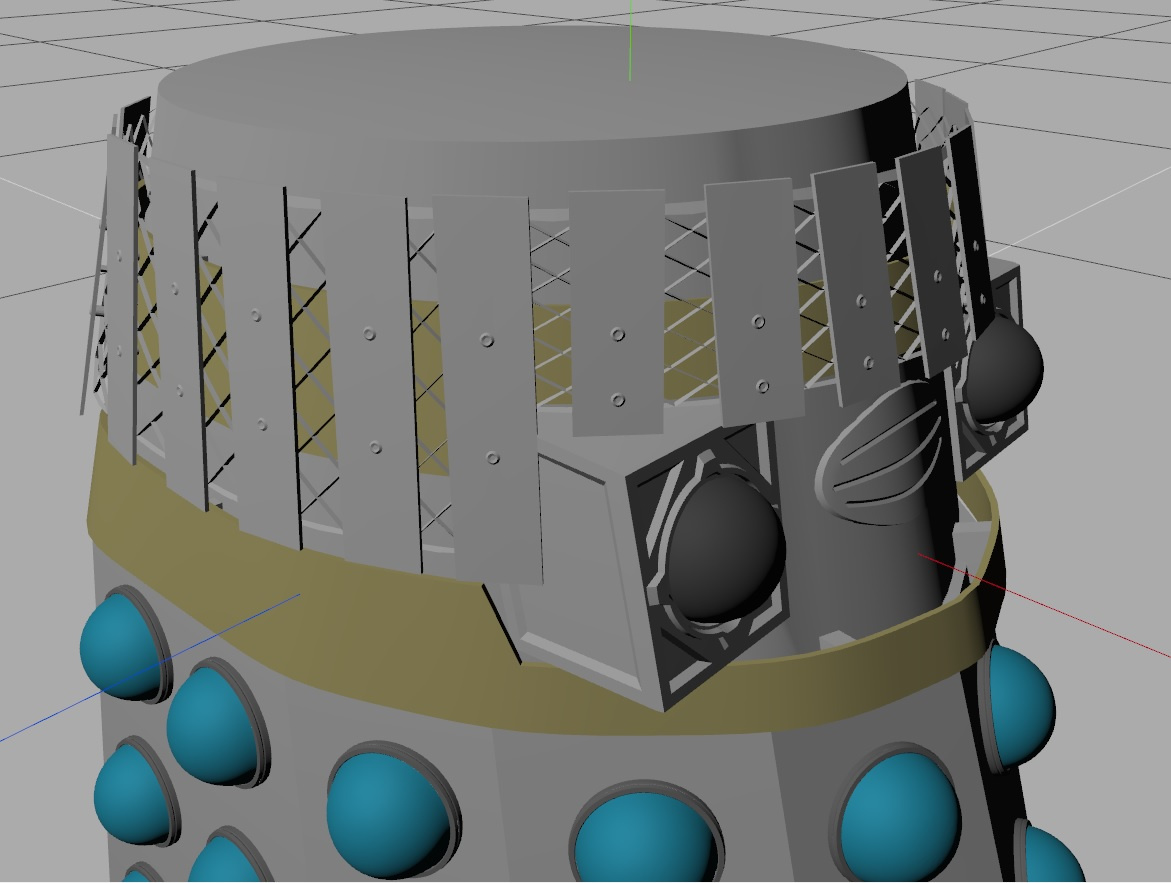 As much as I didn't want rivets elsewhere to make the whole thing sleeker, I felt if I was going to put slats of this style on, they needed something as a visible connector in order to not feel the wrong sort of fragile, and give a little detail. The alternative might have been to do Imperial or NSD style integrated slats, but I wanted the technological look, and done well the classic slats actually look really good. (And with a CG design I am not on a budget here!

There needed to be something in between the guns, or it looked too bare, so I went for an oval, but by sticking details on ti it seems more like an actual bit of tech now rather than just a random panel. I actually at one point tried a TVC21 style grill, but that didn't look right. Consider this an homage to that grill, while sticking closer to the TV style.

For the dome, I included the cowl - because that was a brilliant addition to the NSD - but I slimmed it down a bit. I went with NDP style slimmer lights (After the new series Daleks with tiny lights just don't seem right any more, and these ARE Cushing inspired). While I kept the actual chamfer to the dome, unlike the entirely hemispherical NDP one, I did like the groove going round the edge, so I took that and ran with it for detailing. Was considering doing more, but more panels started getting too bulky looking, and I decided less was more. 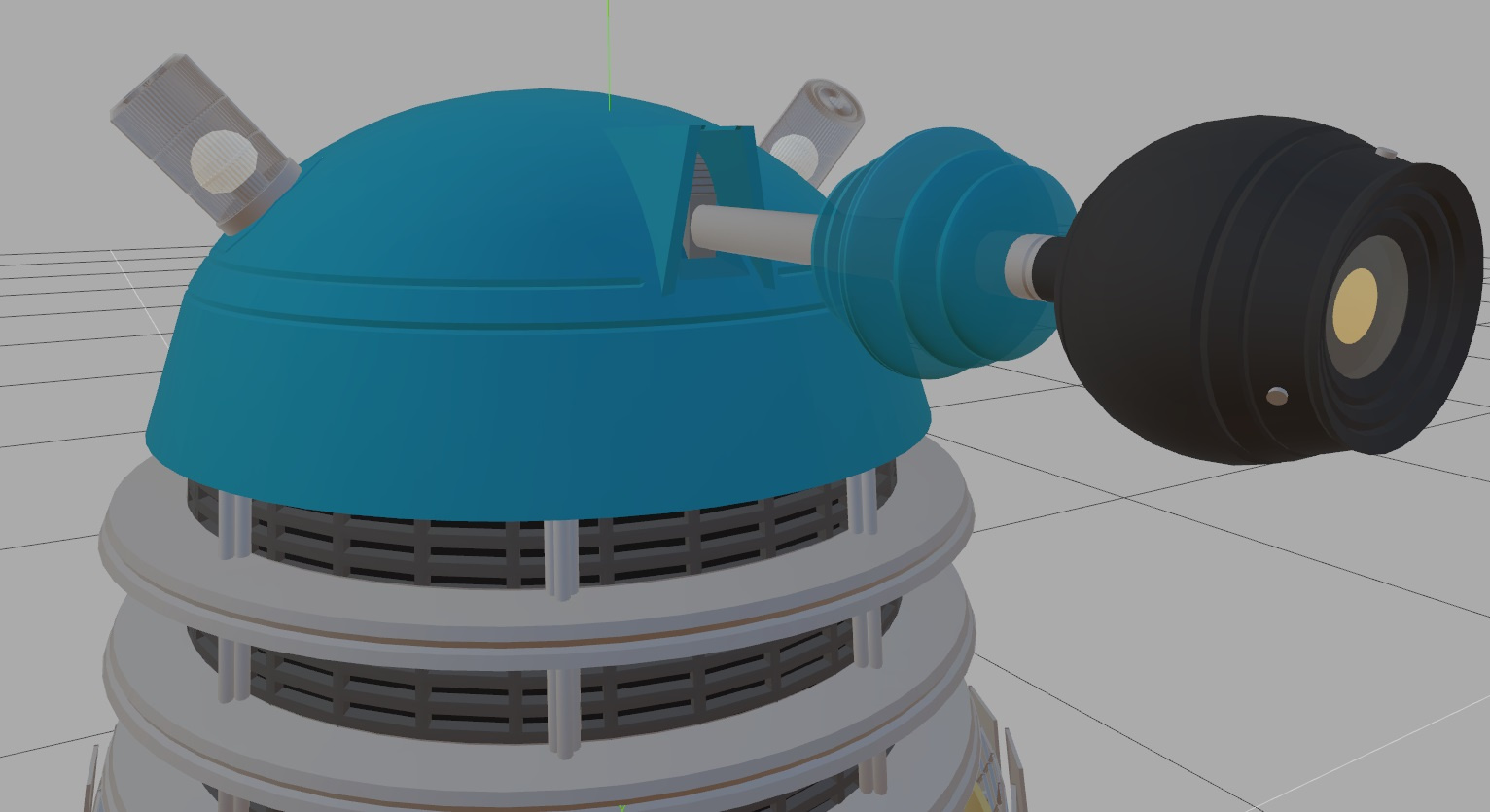 The Eye discs I went for a hybrid of classic an﻿d new - curved, translucent di﻿scs like the NSD, but I went for five instead of six. Look closely though and you'll see the central one is a ridged 'double-disc', to allude to the NSD's two central discs.

For the Eye bulb itself, the basic shape is the smoother Movie style, but with NSD ridges aroudn the lenses, and NDP groove. I was going to add more bumps and whatnot, but it just didn't look right with the toffee-apple shape. I was going to put in Deadp PLanet style three little rivets on the front, but again didn't quite work, so I went with the NDP placement on the sides, but kept them silver.

For the neck bin I went with NSD style grid beacsue...well tis easy to model somethign approximate (I realise the real one is a lot more detailed) and it looks good.

Neck struts I dd the clover style from the originals - its interesting and in keeping with the 'detailed but smooth' feel. They did however have to reach all the way up inside the dome as ending early I think just made it look cheap.

Neck Rings I did with the movie style chunkier looking chamfer, somewhat compensated for by yet another detail groove. Again, my excuse is visual consistency on the details, and totally not lazyness

I do think it looks good though.

For the gun I actually modelled out an NDP one before deciding nto to use it - while that design certainly had...issues - a lot of the detail work was good. However scaling it down to the much shorter proportions it didn't quite work, and since everything else is a hybrid I thought I'd continue it. So I kept the design for the rods and the angular connectors, and kept the idea of the round, angled discs, but spaced them out and made them translucent akin to the original plastic octagons. The result feels distinctly more of an iconic Dalek weapon, but with a modern level of detail.

The sucker is nice and simple, pretty much the movie design with some NDP grooves for detail.