Crew Calculator Version 7
Previous versions of the crew calculator required the user to manually input everything into the calculator, later editions automated certain key positions based on crew numbers, and factors inputted into the mini-calculators. Version 7 has been completely rebuilt so that a user with no knowledge of how their ship should/could be manned can now have the calculator fill in almost all of the positions after filling in only the mini-calculators and answering a few key questions regarding the ship's design and mission.
Version 7 also features an automation adjustment to the crew calculations. Specify the automation level to reduce overall crew numbers based on your technical level. 0 Automation would be equivalent to a modern wet navy ship and level 3 would be a ship with heavy automation.
Users can of course override any auto-filled slots in the main body of the crew calculator at their leisure to better customize/manage the crew of their ship, but can get a quick number of what crew size to expect much easier now. In fact after filling the mini-calcs, now at the top of each page, the only slots that require user input are the following:
Civilian Dependents
Space Traffic Control (Starbases only)
Shop Oweners/Workers (Starbases only)
The calculator now features the following enhancements:
1) A new, simpler/color coded User Interface that puts all the slots that need to be filled right up front.
2) The dock workers mini-calculator has been modified so that instead of referencing other example tabs for determining total possible embarked on the starbase, users can override and input the number of crew a docked starship type has in the "Ship's Crew" column.
4) Two blank crew member slots has been added to each subsection to allow users to add their own custom crew members more easily. These new members will automaticaly tally with the rest and add to the officer, enlisted, or civilian numbers as well.
5) The Totals box has been moved up to a more prominent position, and has a larger font to make it stand out more.
6) The example tabs are no longer truncated for smaller craft type, if I get enough comments to change them back I will.
I offer this for free and hope it is as well received as it has been in the past. I only ask that credit be given when it is used and that you post any comments, suggestions, or changes you make to it here so that I can incorporate them into future versions.
To use, simply open in excel or open office, and follow the instructions on the manual tab to determine the number of crew to add, or fill in the mini-calculators and see your crew makeup.
Reference the manual in the first tab or post questions here for additional help. 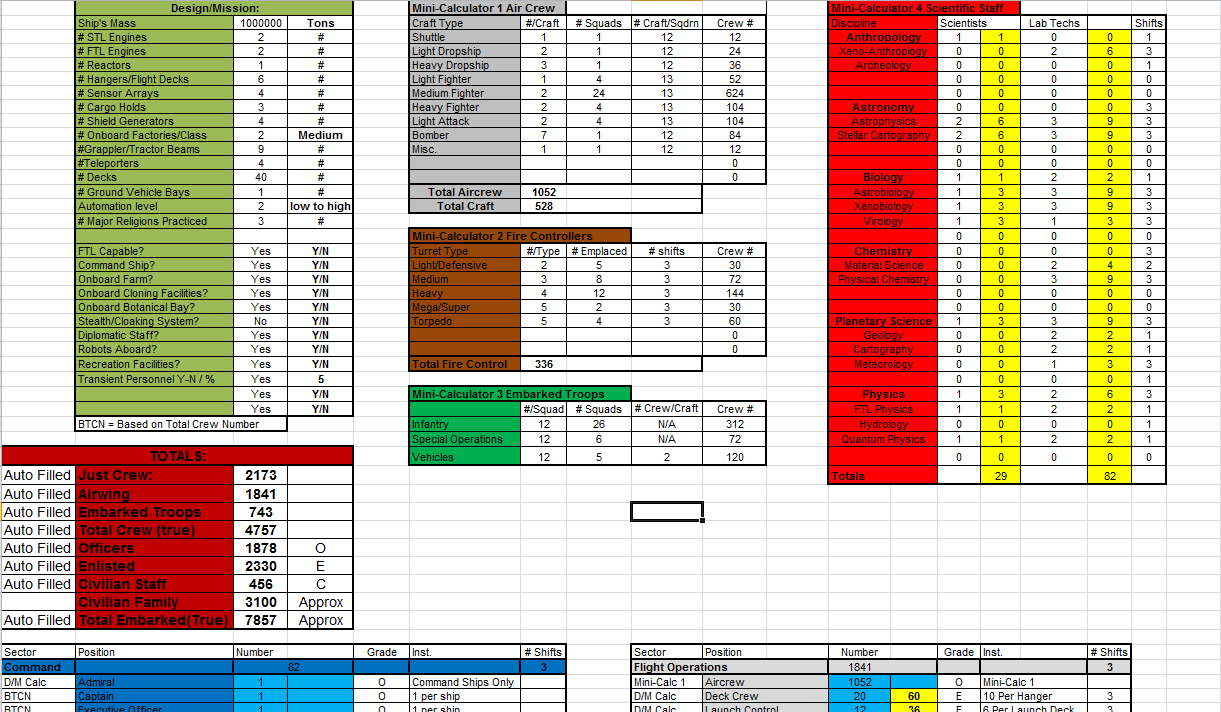