3DWar of the Worlds CGI

prefim0 Posts: 0Member
August 2010 edited August 2010 in Work in Progress #1
Ages ago I was in contact with someone about permissions for doing my own CGI version of The War of the Worlds. The idea was it would be my visuals running in sync with the album. This would mean a near two hour animated piece with only a few people on it and no budget (and I mean zero pounds!)

I was given permission to create it but had to run it by management before it could be released (as it would have included the full album as a sound track). Strictly for non profit mind!

As I realised fairly soon into it that in order to not make a complete pigs ear of it all, the amount of character animation in it would require a full mocap setup (something I don't have!) the project ground to a halt. Spaceships and machines are no problem, people! they're tricky!

Months have gone by and I've not looked at the project but I would like to release online what little did get done. the first album track was animated and part of horsell common was done.

Most of what I had was prep work so animatable rigged fighting machines etc.

Ok so here are the test clips I wanted to release. Ollie records have cleared these and the two album tracks have had their audio tracks stripped so no issue there! This is all first pass stuff so it never got the effects polish I would have liked but at least you can see some of us want a CGI war of the worlds so bad we are prepared to try and make it ourselves!! If you want to get the full effect, play the first two tracks of the album while watching the first two videos below! 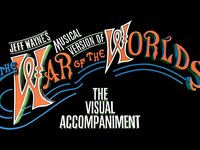