So I am working on an excelsior inspired, Galaxy class sized behemoth of a ship. I am using Shapr3d because, try as I might I can't get my head around traditional modeling. I am quite aware this may leave me with crazy topology to deal with once I move to blender to light, texture and render, but I will deal with that later.

I sketched out the basic shapes, and then cut the whole thing in half, then I will make the interiors and then merge it back together. 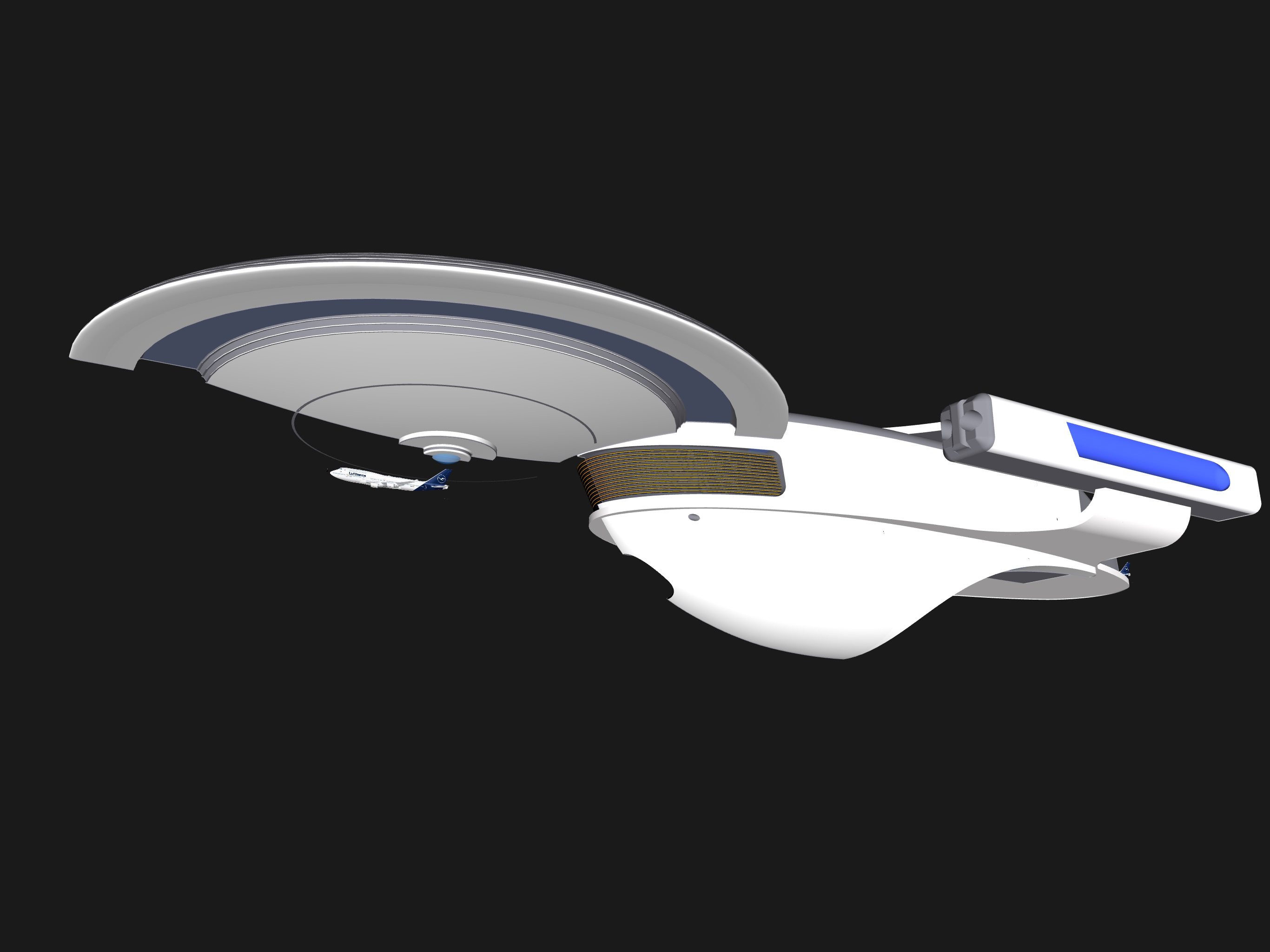 This is a basic perspective side view to give the overall layout and scale (with the flat 747 image in there) the actual scale will be decided once I kinda validate my deck layout (see later pictures). The warp engines are a placeholder, made when I was about 2 weeks into using Shapr3d and did everything wrong. Left just for the basic dimensions.

Front orthographic view. It kinda has always driven me nuts that warp nacelles are so floppily attached, and the modern trend to "we can make any shape now, so lets go crazy (think Enterprise E) thing" drives me nuts too, so you can kinda see that in my somewhat blocky design. 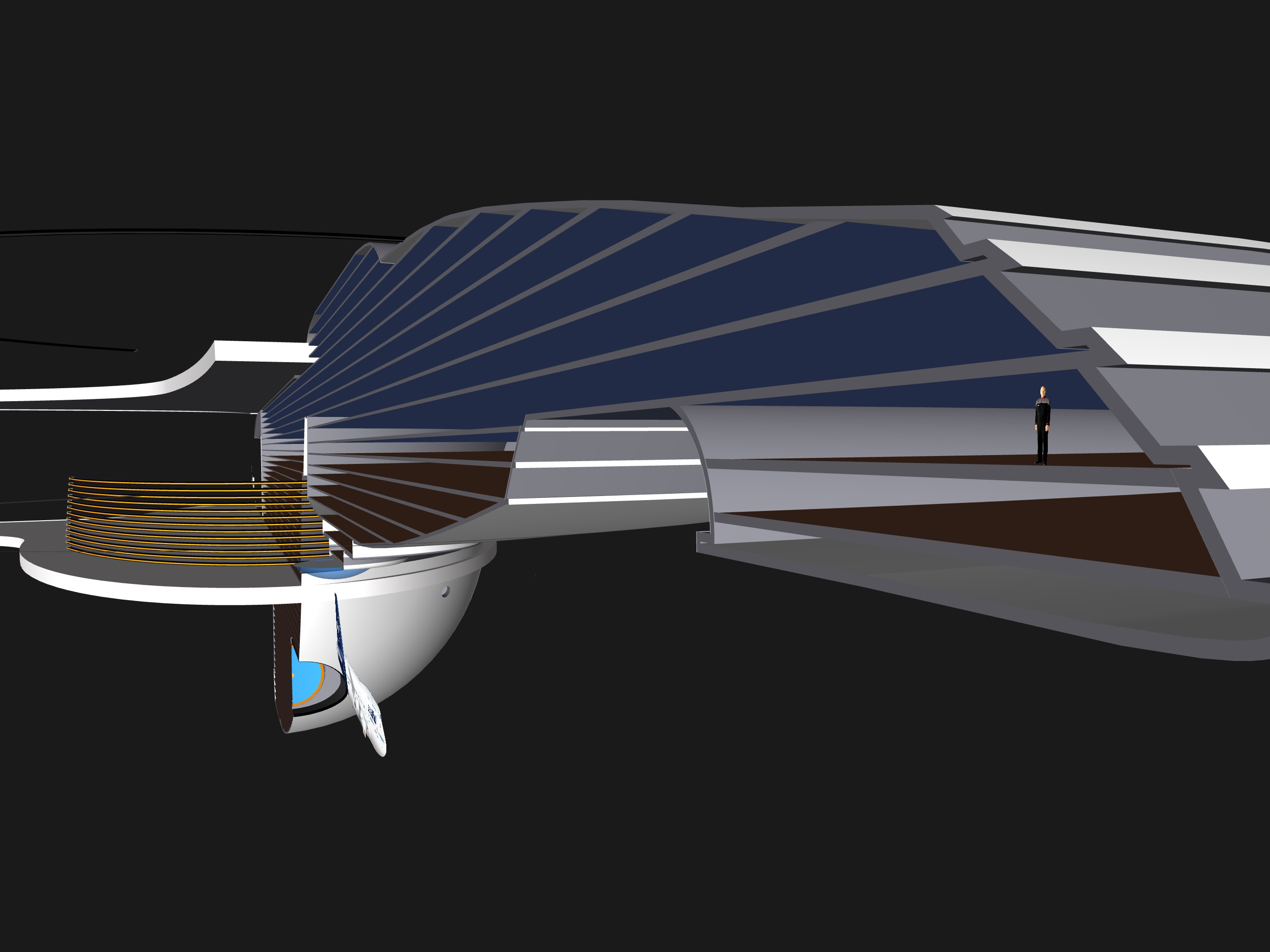 I made all the decks, and then I realized I didn't leave much interstitial space for utilities, Jeffries tubes, and that kind of thing. But at the same time, this @#$%^er has enough decks that I could just use entire decks for that, or more of the interior of the ship without window access. At this scale, with Picard being 5'10 this comes out to 8 foot ceilings 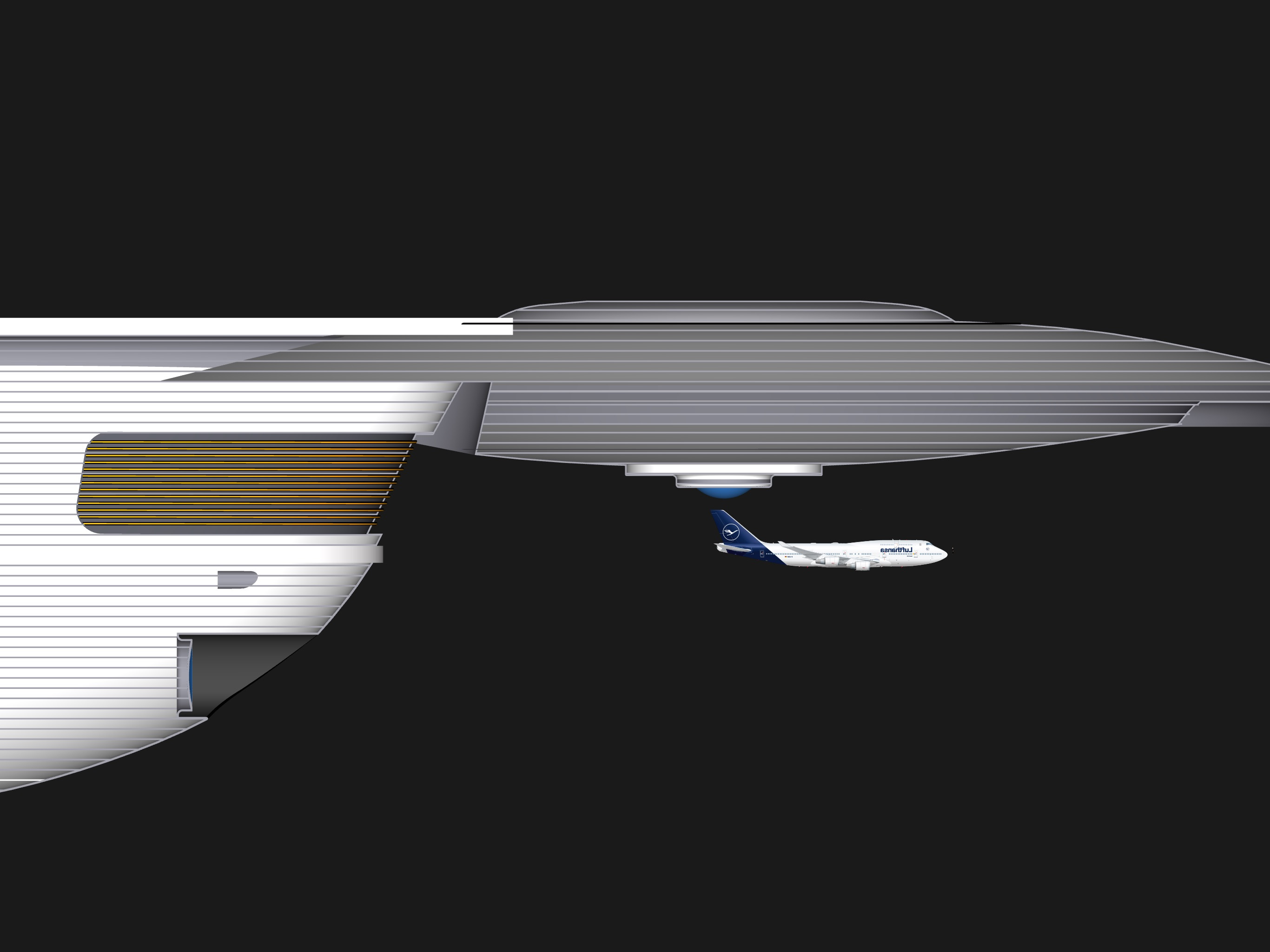 Another shot of the basic deck layout. 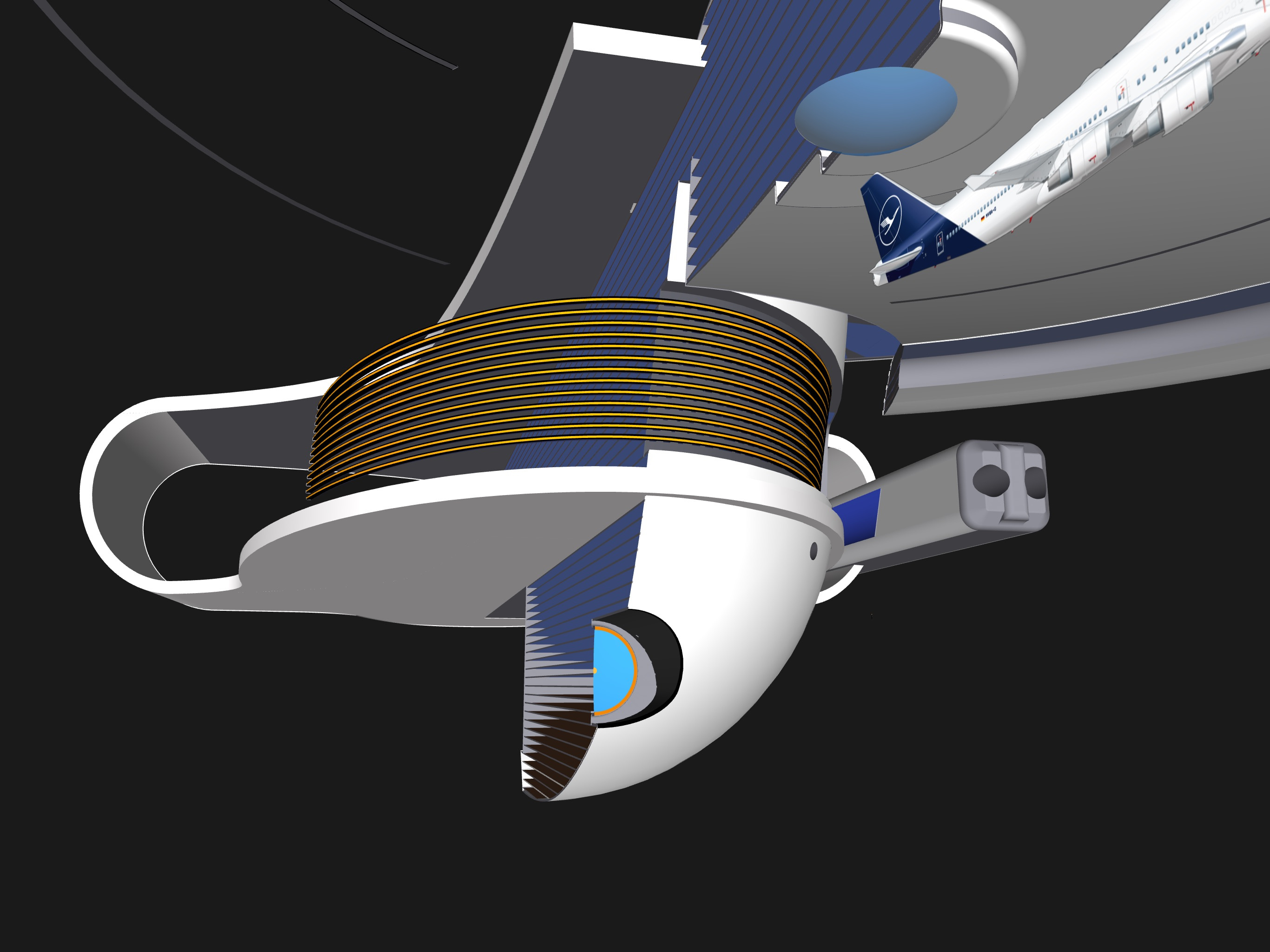 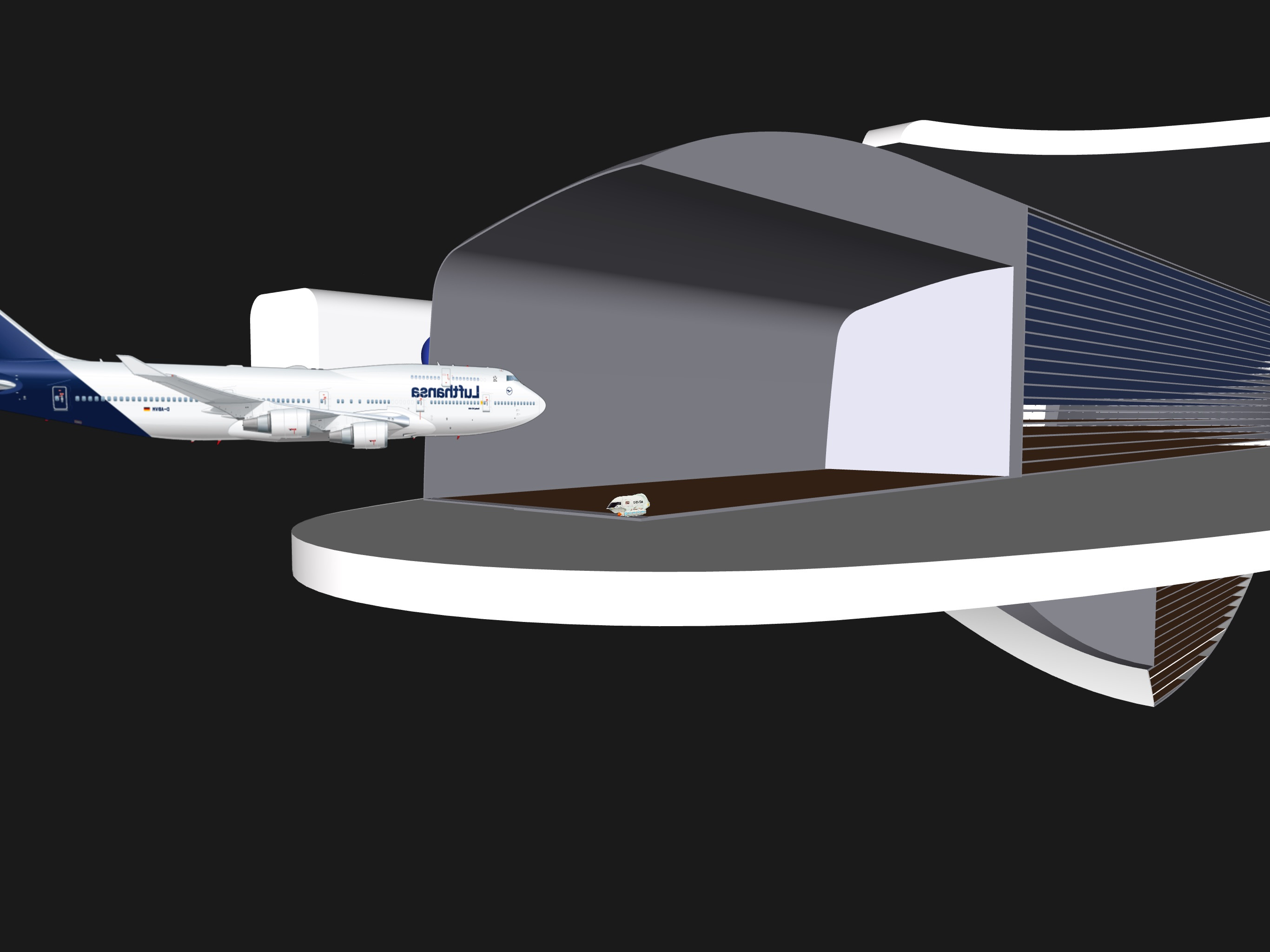 The main hanger deck is almost ridiculously huge. I haven't measured it out, but it might fit something Oberth sized in it. 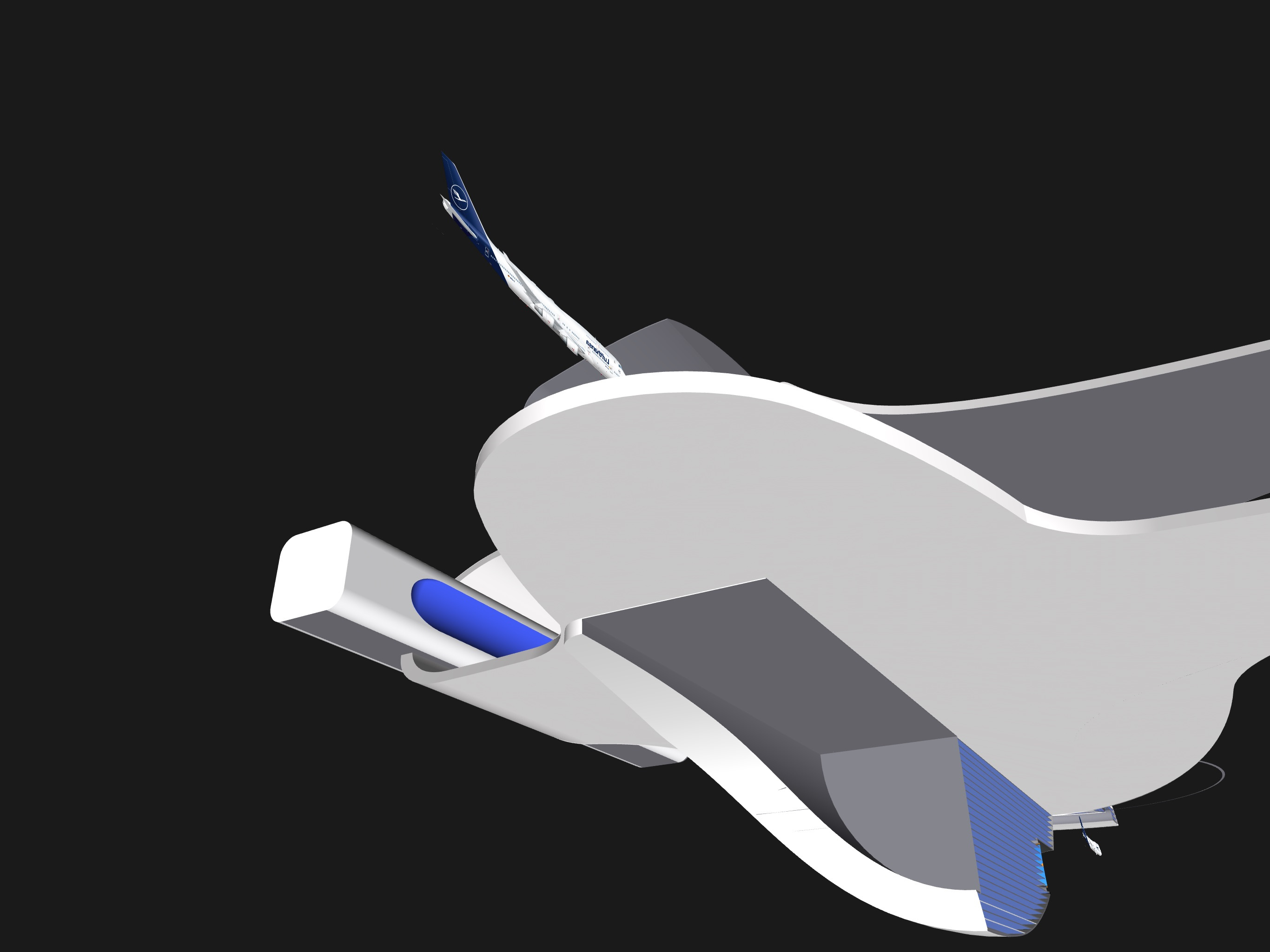 The grey section on the bottom will allow for half cylindrical shaped "mission extension" modules to be added - extra matter/antimatter for trips to the LMC or Andromeda for instance. Or even additional cargo/science modules for stuff inside the federation.

Ok so where does this fit in canon, so that people know what to criticize and what to just sort of go with. Ok imagine a few things:

1. I am not sticking strictly to Star Trek history - I am more extrapolating from now, to say an alternative universe (from Star Trek) where NASA/ESA eventually converge on similar principles, and the major federation players are still around, but it'll be more reality based aside from us having discovered warp drive.
2. Design wise, it'd be like if TNG never happened (with its grey everything) but the excelsior type design was still extended out over a few classes to something Galaxy sized.
3. When I render it, I am going to for as photoreal as possible. It will be overexposed when near a star, it will be self illuminated in deep space (or on the night side of a planet in orbit).
4. I am going to model as much, but not all of the interior as I can - pretty much just in service of what you'll be able to see from the outside. For instance, the 8 warp cores this will have, will be placed intelligently near each other in the engineering section, and I'll figure out what the major portions of the ship are, but I am not going to model the 24th deck, third bathroom. The neck grill and other grill like things will be for cooling, and I'll try not to get into any Cerritos "wait, how do they get to that part of the ship?" kind of things.

Thanks! I hope to update this pretty regularly.