How's it going, everyone? It's been a while since I was last on here, mainly because I wasn't sure some months ago if I was going to continue doing CGI as a hobby. I was at a point where I didn't want to mess with it anymore, I didn't even want to look at anyone else's projects. So, I took a break. I shut down my blog (no big loss there, IMHO) and everything. Around the same time, there was a sort of a rearrangement of certain personnel at work. Basically, I work for Walmart and around September/October of last year they were rearranging management company wide. They were going down to less managers, so anyone staying a manager would wind up with more responsibility and many of us would also get paid more. Well, I'm a manager and this affected me. Basically, I went from being one of the people in charge of the overnight stocking crew... to being one of the people in charge of the overnight stocking crew. So, pretty much nothing changed other than my job title, picking up a few added responsibilities and getting paid more per hour. I also went from five eight hour days a week to four ten hour days. Though, I often work well more than 40 hours a week, many weeks over 50 hours. Also in November, I decided to move. This was partially due to my hours changing. I don't own a car, I don't feel I really need one. I was relying on public transportation (buses) but the change in hours made that really inconvenient. So, my options were basically to lose even more time due to commuting, buy a car, or just move closer to where I work. Since I haven't even had a driver's license in years, I decided the best bet was to simply move. So, I moved into a nice one bedroom apartment that's about a fifteen minute walk from the store I work in. It's really nice and I'm really happy living here. I went from an hour on a bus to a short walk.

Anyway, all of that combined with just not wanting to do CGI is why I stepped away from this stuff for a while.

So, lately I've been thinking about it again. After the holidays things started slowing down at work, but then we had inventory a few weeks ago. That's a giant pain and I was working a lot of hours, but it's behind us now and I'm more or less back to my regular schedule. I've been watching a lot of Star Trek lately and watching that gets me in the mood for this stuff. So, I bought a nice i7-10700 processor for my desktop and I was all set to do some CGI. I fired it up last weekend and found that (more) stuff was going out on my ASROCK motherboard. (never buying that brand again) It's not very old, obviously, as it can take a 10700 processor. It's got an LGA 1200 socket and it's the only motherboard I own with that socket. COVID has made components kinda scarce, so I was going to just use it even though the USB 3 header went out some months ago. Well, now it looks like the USB 2 header did as well, so that leaves the computer with no front USB ports. So, at that point I grabbed some components I had on hand and put together a rig using a Ryzen 5 that's a few years old, but at least it works. (it's actually the same processor I have in my gaming computer, it works fine) With a computer that would work for this stuff, I set about deciding which software to use. Basically, I own a license for Lightwave 2018 and then there's always Blender. I still don't like how some things are done in Blender, so I decided on Lightwave. After that, I was thinking of possible projects.

I recently watched both seasons one and two of Star Trek Discovery, so I thought about maybe building something from that show. I also watched the reboot Trek films in 4K recently, so I thought about doing something from that. I've also been watching TNG, Enterprise and most of the other Star Trek movies. (like I said, a lot of Star Trek) So, out of all of that, I basically narrowed it down to the USS Fanklin, the refit Enterprise from the original six films and the retconned Enterprise from Discovery. Or possibly just do my own version of a reboot Enterprise (again.) I was looking at a flash drive that has some Enterprise refit references on it when I found a folder marked "Lightwave." I don't have a lot of my CGI stuff from days of long ago. When I decided to stop doing this stuff, I mean I got rid of all of my works in progress and everything. Well, except for one file. Aside from my TOS Enterprise, which I knew I still had, along with some other completed models, I found an Enterprise I was working on a couple years ago. It's basically the TOS ship with some additions like grid lines, weapons ports, thrusters, hull paneling, docking ports and more glowy bits. The model was about 75% complete, so I decided last weekend that I was going to finish it. I got rid of some bits that I didn't like and took some stuff from my "canon" TOS Enterprise to move things along (no sense reinventing the wheel.) Anyway, I finished the model yesterday and then set about doing some images with it. I haven't done any of this stuff in a while, but it's pretty easy to get back into. But that's one reason I went with Lightwave over Blender, I can remember more key binds and tool names in it.

So, long winded explanations aside (thanks to anyone who actually read the wall of text and stayed awake) here are a couple pieces hot off the press, so to speak: 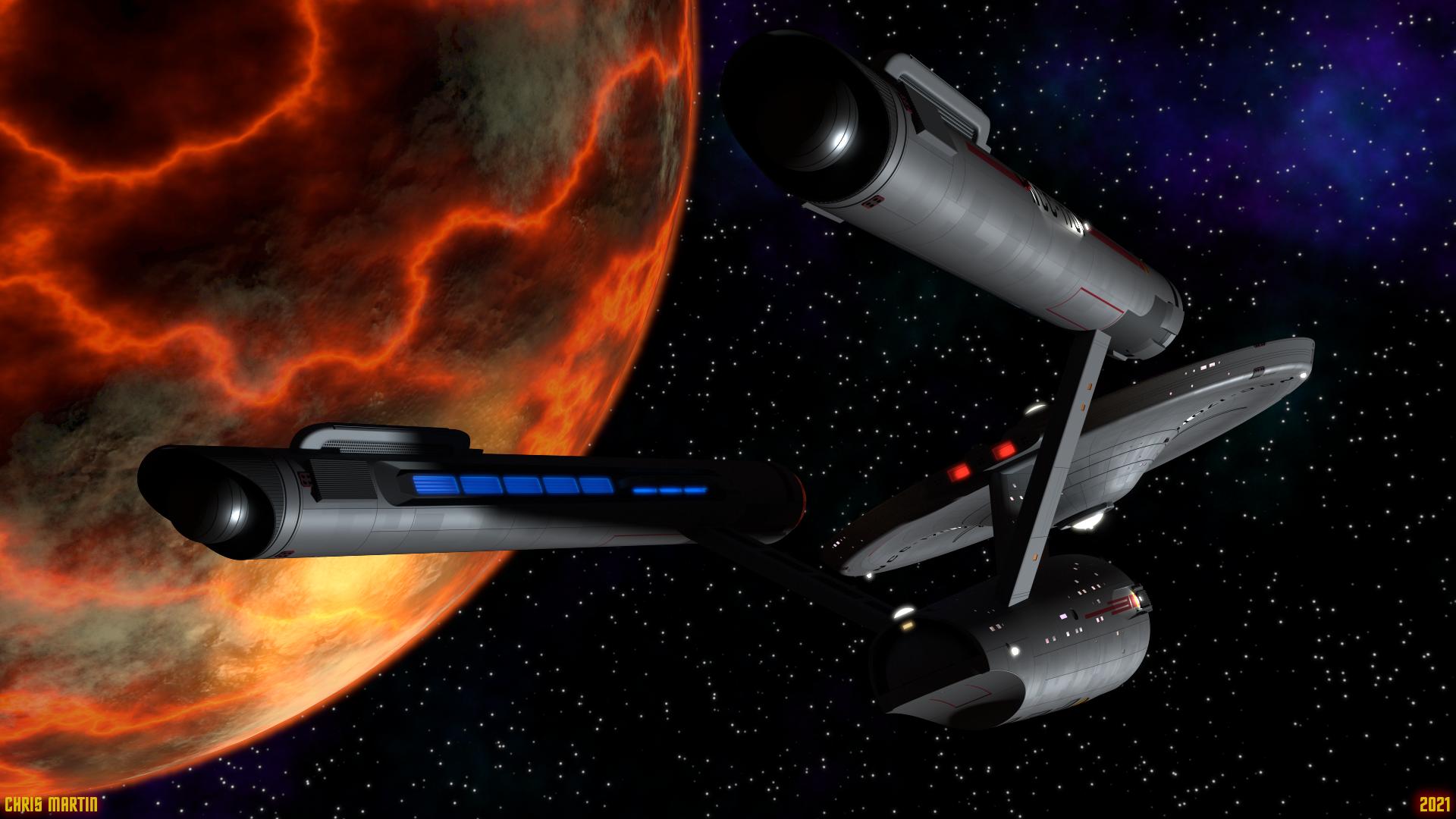 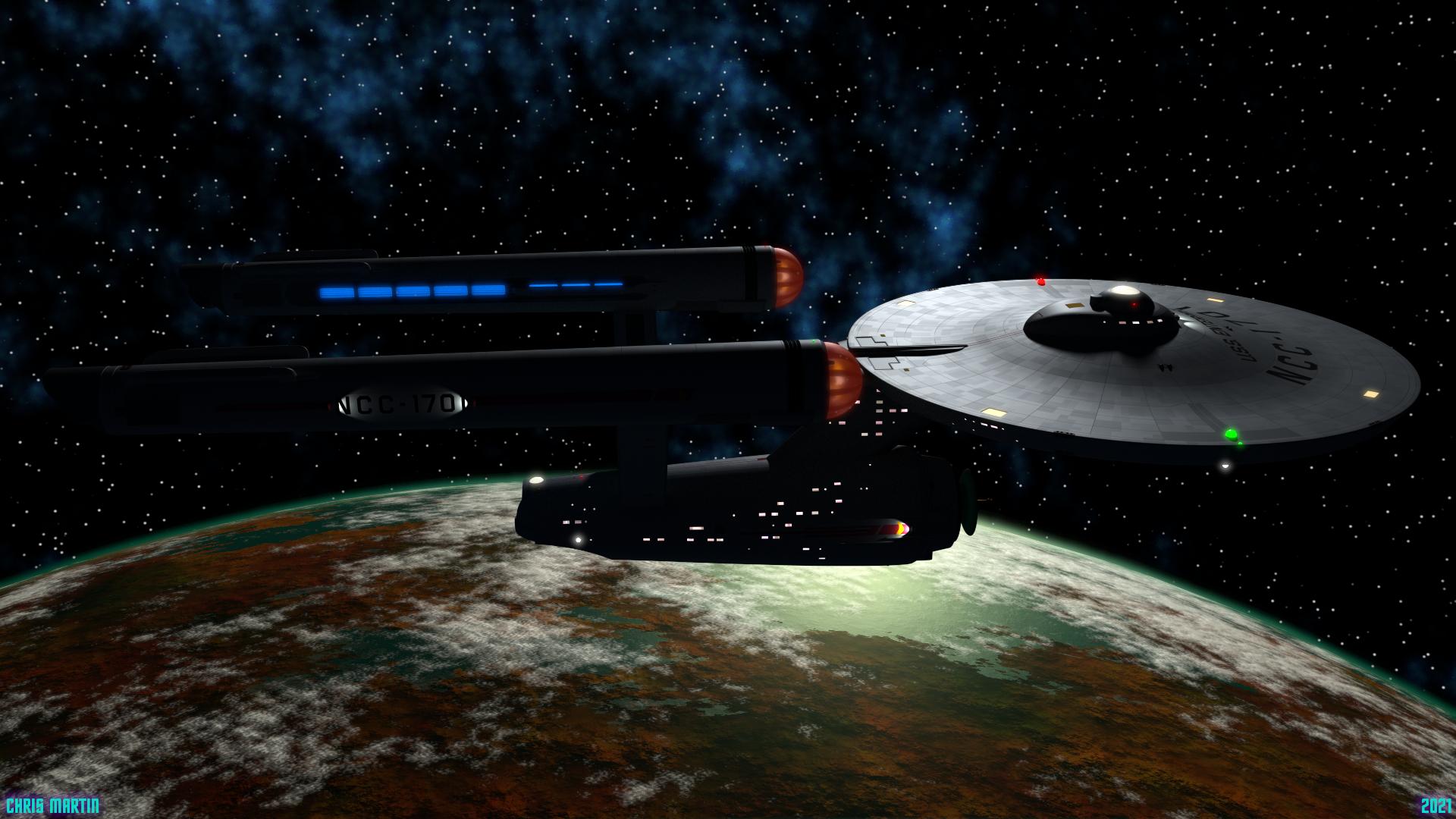 I meant to do a couple more, since the TOS E looks great from any angle, but I had to figure out how to make planets, as that was never one of my strong suits. I tried a couple different approaches before I finally decided to just use procedural textures on spheres in Lightwave, render different ones and them composite them together in GIMP to make the planets. The top one is supposed to have rivers of lava and the bottom one is your basic Class M planet. I'll probably do at least a couple more through the week as time permits and before I move on to starting a new project.
Post edited by evil_genius_180 on June 28