Now that I've decided I'm going to keep trying to work on this until I finish it (or the file gets too big), I'm giving this it's own thread. On the bright side, I've figured out why my MacBook it so slow: the hard drive is going kaput. I'm using my dad's MacBook now, but I need to upgrade my Lenovo eventually, because it lacks enough processing power for a large file. 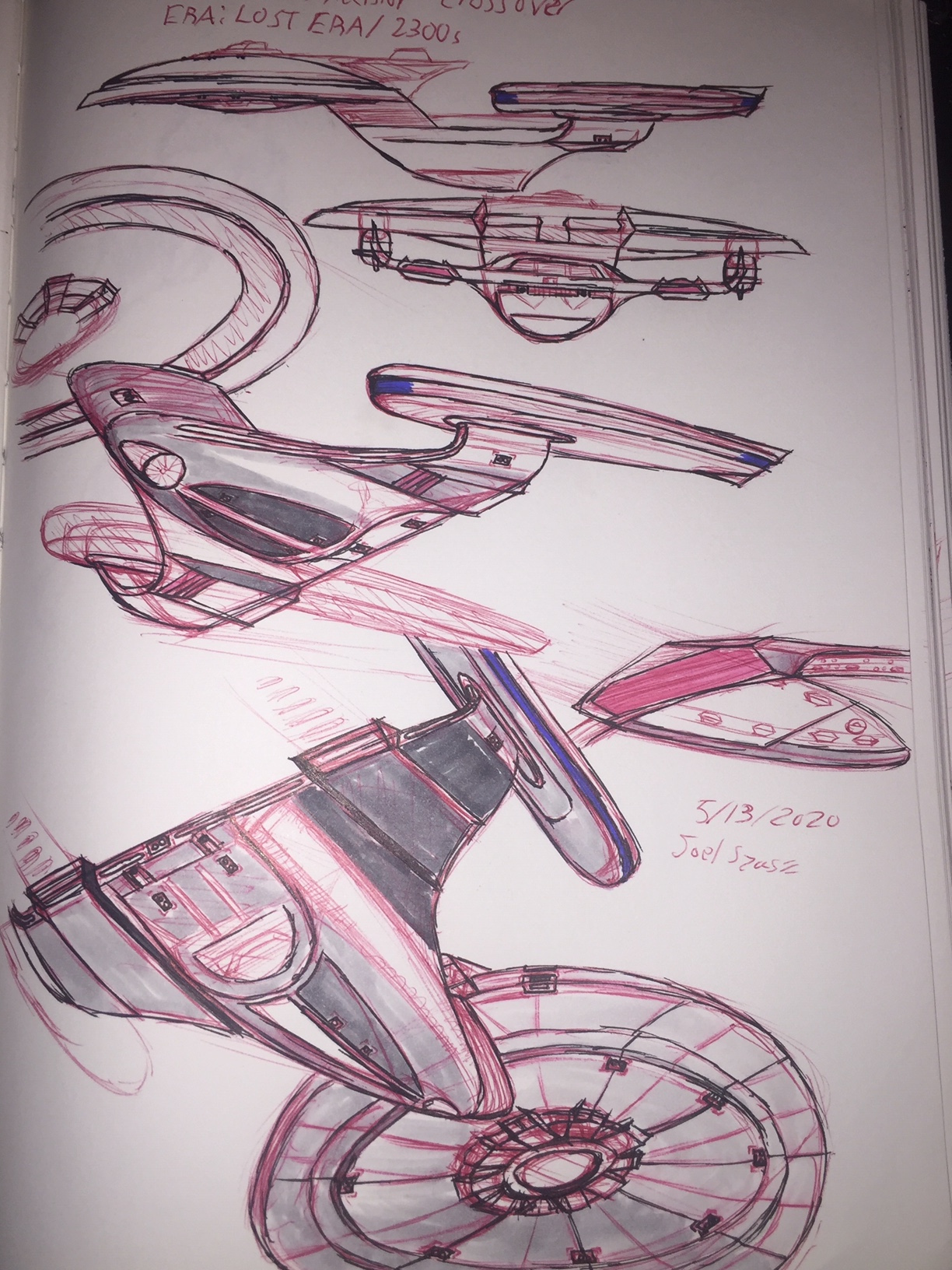 USS Persistence is the working name for my Excelsior-era Wedge Design.

"The Excelsior class was too long and too tail-happy at high sub-light speeds. The long lines were essential for Transwarp, in theory, except Transwarp didn't work in practice. And so a more compact design was proposed...

After the Skirmish of Altamid, which resulted in the USS Lexington* losing her nacelle pylons, and then her neck during what was supposed to be a rescue expedition, as well as damage to Starstation Yorktown's patrol force, it became abundantly clear that perhaps thin pylons connecting a starship's warp drive units was not sufficient. And it wasn't like Starfleet didn't have a clue. During the past two wars with the Klingon Empire, Starfleet had more instances of warp drive failure from damage, while the Klingon's wider wing-like pylons proved to be more durable to nacelle loss."

The design that you see here is a compromise between different agreed upon elements. The shuttle bay is bracketed by the wide wing-like pylons. Doing the aft and ventral views is going to be fun, because then I get to show how the fantail is bracketed as well. Come to think of it, it's a little like the Luna class's shuttle bay.

She has Enterprise-B style impulse drives, as recommended by TNC-N3I.

Contrary to Borgman's recommendation, but favored by TNC-N3I and me, I went with an Ingram-type primary hull, but with a command hull based on the distinctive Excelsior class. Working on the circuitry-like pattern will be fun, and a long way off.

I gave her a taller neck so that I could mount the nacelles underneath, but also have the nacelle pylons curve up, with the nacelles on top.

I thought about Borgman's idea of making this a pre-Excelsior design, to try to make the Spore Spatial Displacement Drive work again, seeing as how Stamets was able to get the Discovery to work. But then while on a walk, I thought about how big this design was going to be in my head, and how ludicrous an idea it would be for Starfleet to commission yet another design to use an FTL method that could be unpredictable at the best of times. Add in that classified escapade into an alternate timeline, and there is no fucking way that I could justify Starfleet approving what was meant to be a battleship intended to spank K'Tinga's into the next century while on leave from exploration duties as a testbed for such a propulsion system. I came to the conclusion that any future testbeds for the Spore Drive would likely be Oberth-sized, using a skeleton crew. It might still be an idea for a future design.

Publiusr-
The idea of a Reliant-type rear shuttle bay has kind of already been done with the Ariel class, and it would be a major change to the design. I think I know what you have in mind: Take the Churchill's raised superstructure, and smooth/thin it out so that it works as nacelles pylons. Maybe another impulse drive in between the two shuttle bays, or a third shuttle bay. It wouldn't be impossible with enough time to sketch out a prelim in Photoshop, and then trace over in Illustrator. And then copy/past the primary hull and nacelles, which remain unchanged. I get the feeling I won't have much time to spend on this over the next few days due to getting home late from work, so I'll have more time to think about this.

To answer Borgman's questioning why we didn't see any members of this class on screen is because
1) Starfleet's huge. We know the Andromeda, Korolev, Wambundu, etc. are canon by name, but only a few of these have been given designs after the fact outside of fanon.
2) The Persistence class fell out of favor to the Excelsior class after the signing of the Khitomer Accords. There was another production run after the USS Ambassador class was launched, along with the first tranche of Alaska-class Battlecruiser, but such designs were only given 5-10 class member production runs, and after the Romulans promised to stay out of interstellar politics, battle wagons became increasingly a thing of the past.

Of course, without Starfleet's premier Myceiliobilogist, such a design was also due to fail to begin with.

Next up, I'm doing the dorsal nacelles, and going to try to complete prelims for the fore and aft views. And try to work out the basic outlines for the secondary hull impulse drives. That, and the alternate shuttle bay. Oh boy, this is going to be a huge file before I'm done!
Post edited by Guerrilla on December 2020