A billion years ago I worked on creating several variations of Todd Gunther's Ingram Class. I spent about ten years on and off building seven different meshes of the ship before calling it a day on the whole project. I found I was building for others, rather than myself.

Sadly my entire body of 3D work was destroyed last December (2019). You don't need all the details, but I lost everything I'd ever created. Earlier this year I came back on here and rebuilt one of the lost projects, my version of a flying saucer (https://forums.scifi-meshes.com/discussion/10000623/3da-long-return/p1). Felt good to dip my feet back in the water and start something.

Now, i know I swore after the Ingram I wouldn't work on a Trek project again but... I did. I rationalized the Oberth Class (that project is all gone but for two renders). And now it's time to rationalize the Excelsior Class using my own ideas. I want the ship to fit in with the TMP/TWOK design ethos and so that's what I will be aiming for design wise. I'm open to suggestions and ideas, but don't get offended if I don't act on them.

I've blocked out about 25 decks at the moment, and that's likely to stay at that, a length of 557 meters subject to change, and found a way to have a shuttle bay that isn't something that's just stuck on the back as a separate structure. I'll start detailing this beast and keep you posted. It will have some Excelsior details, but this is not going to be your father's Excelsior from 1984.

Oh the name? Just one I like, and the registration is a play on the original one seen on the Horizon model in Sisko's office. 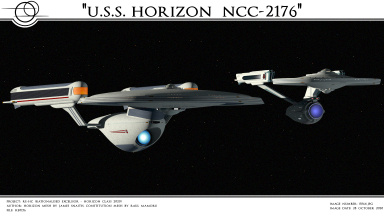 Post edited by Jayru on October 2020
The watcher in the tower... Waiting, hour by hour...
- Mike Oldfield