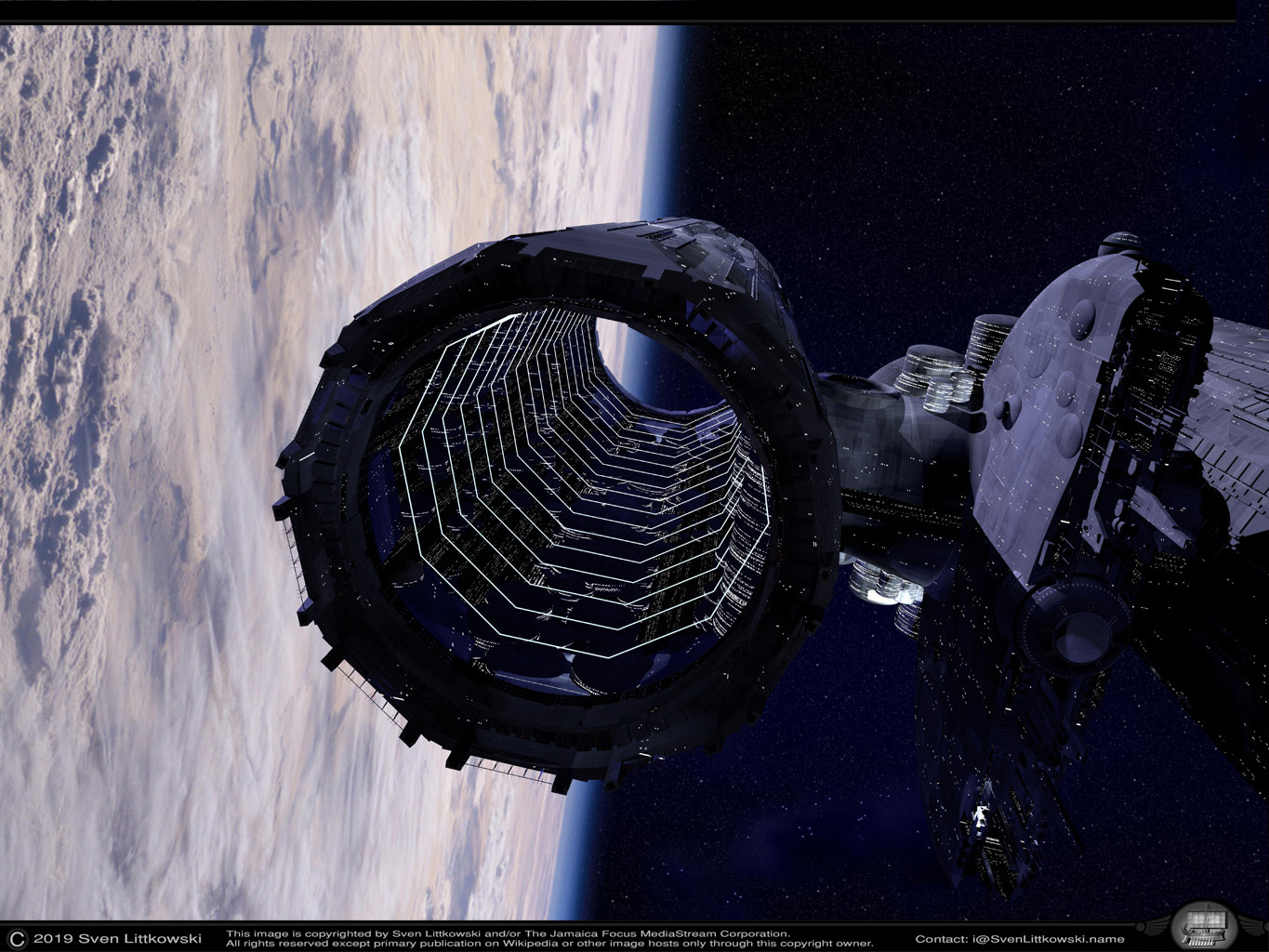 Total View from a Distance 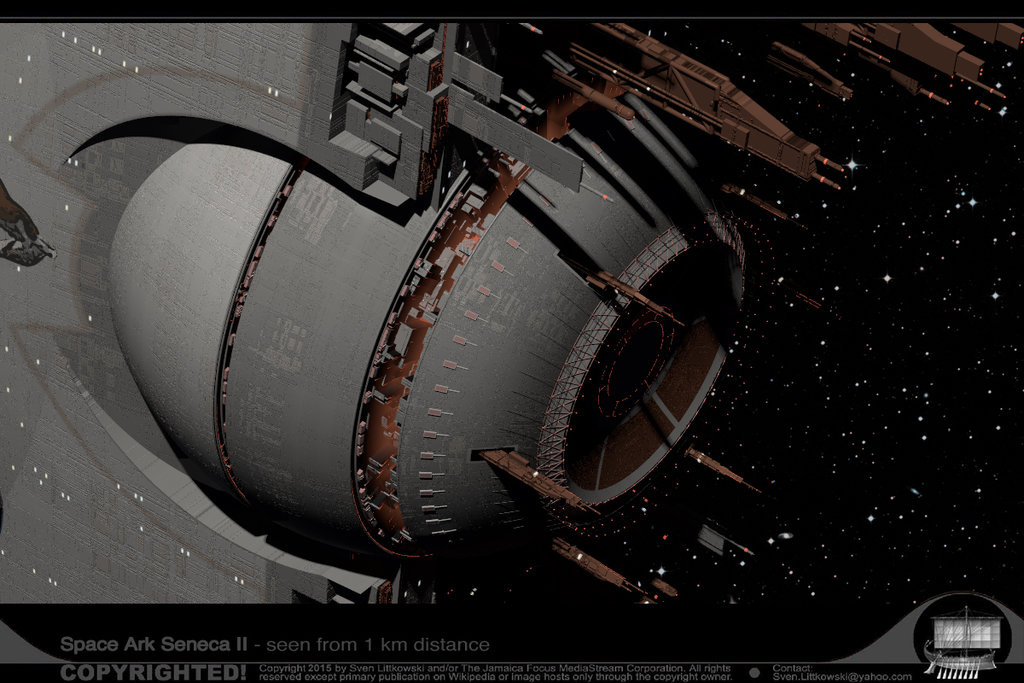 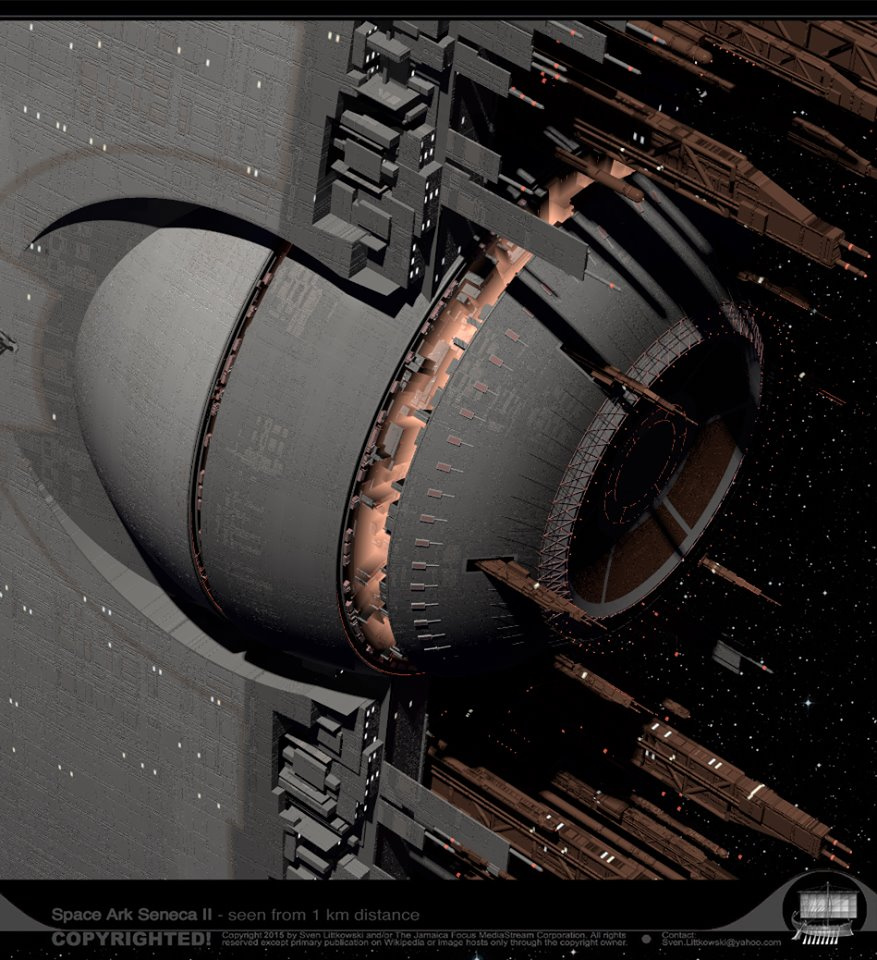 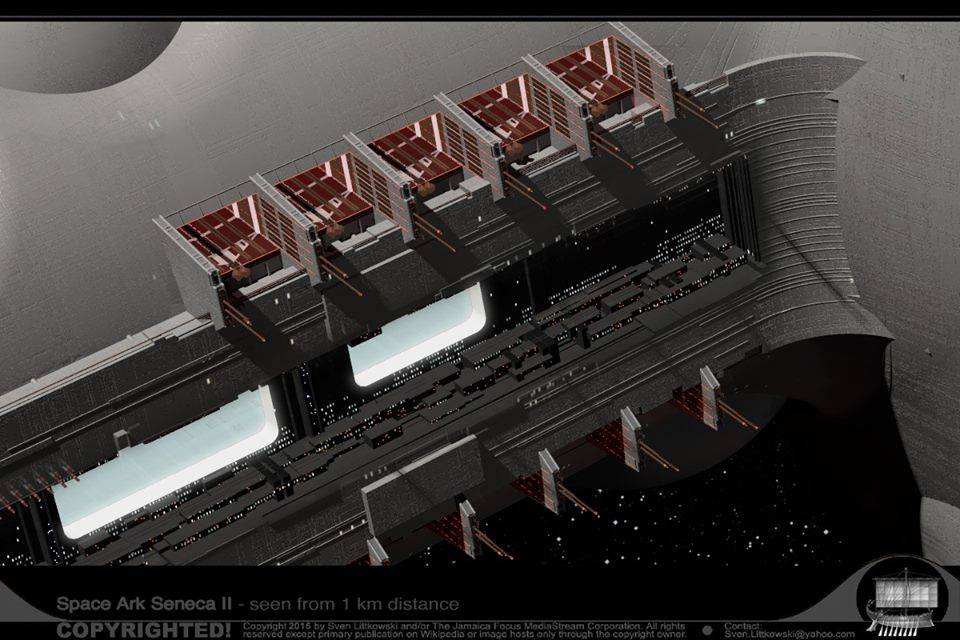 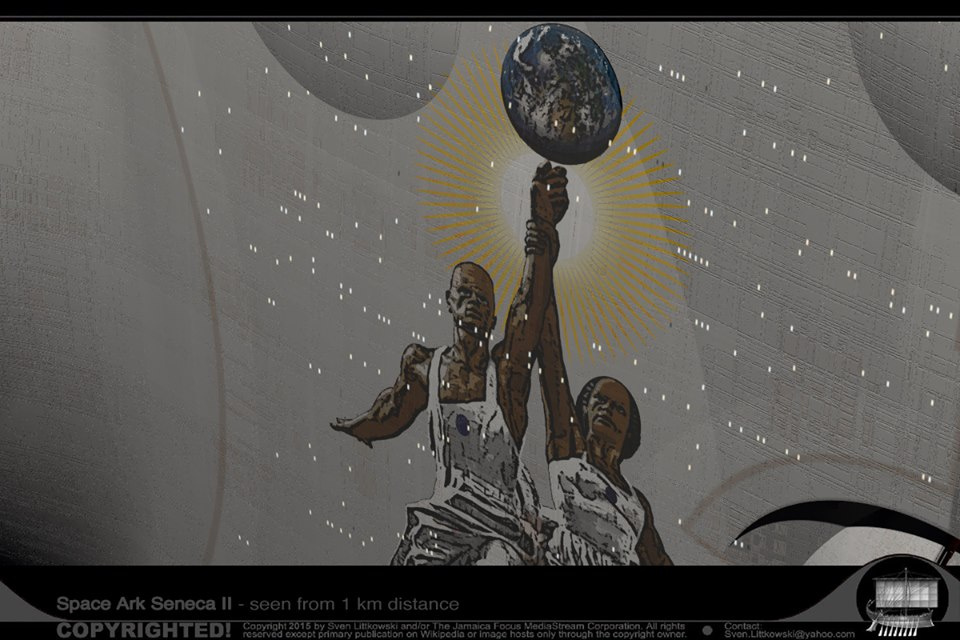 View: Insignia of a Male and Female Settler 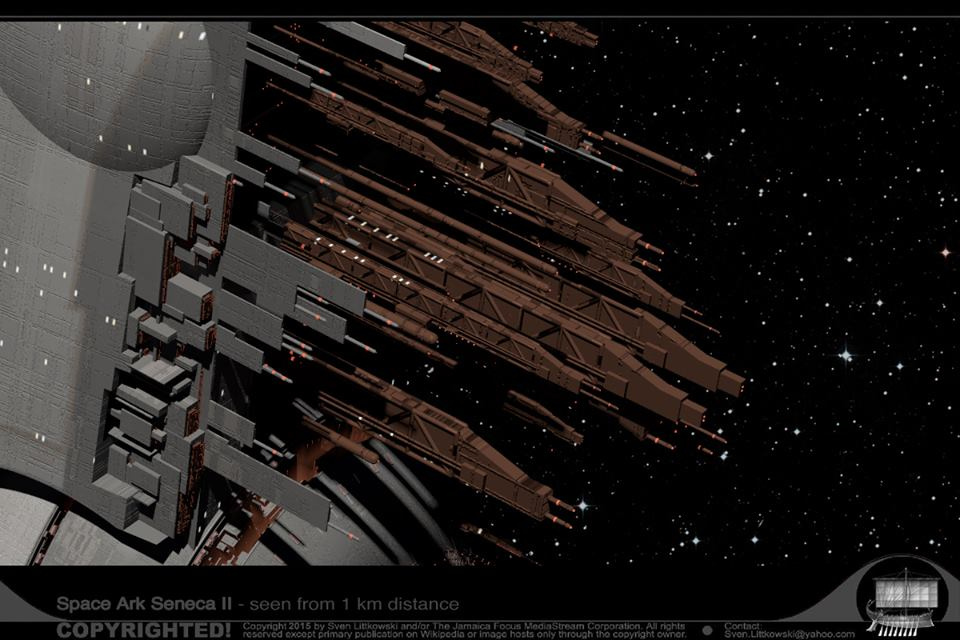 View: Long-Range Antennas at the Front 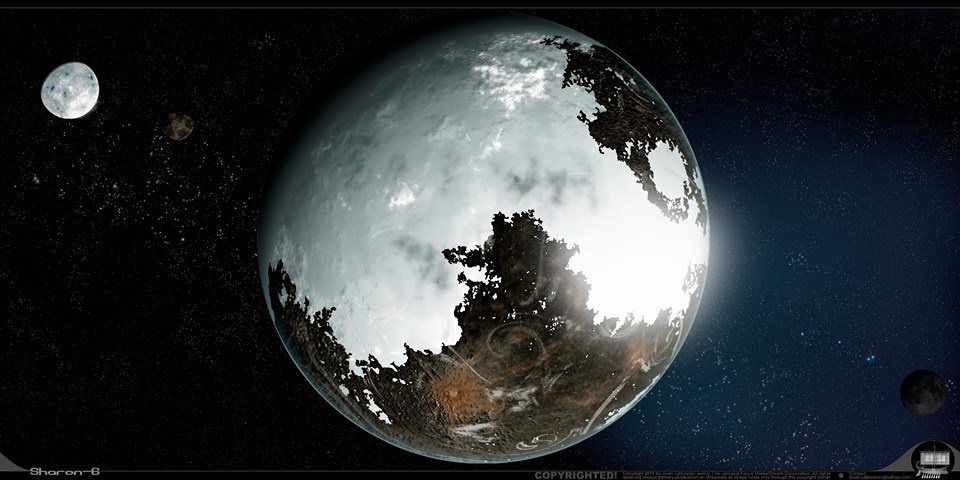 View of the Early Endurion, a Rocky Planet 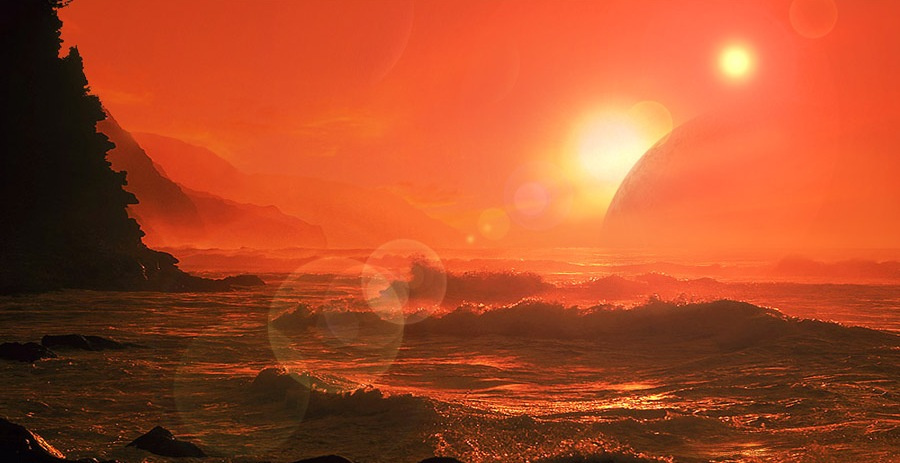 View: a Coast on the Terraformed Endurion 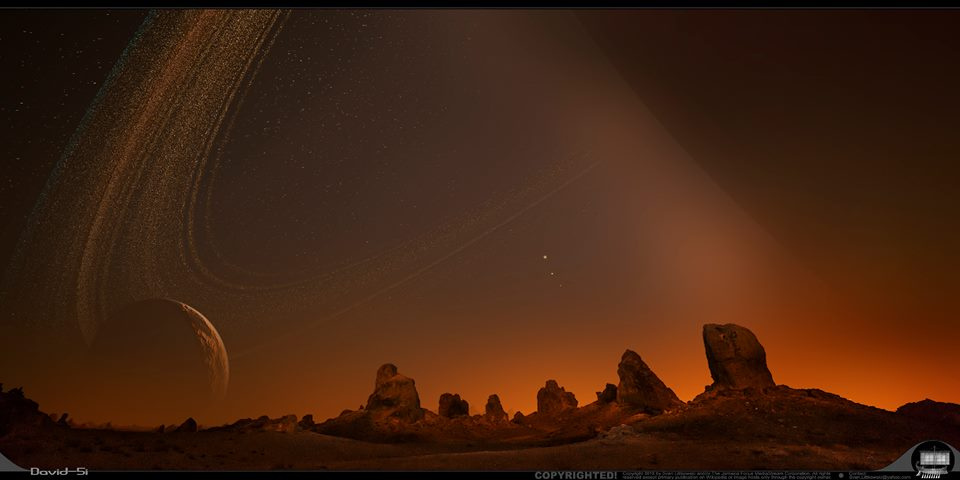 Peaceful and undisturbed, as they did for billions of years, the planets moved along their quiet lanes around the two suns in the center of this star system. But now, in the 3rd billion year of their existence, something had entered their system. And here it was - a large object from somewhere far, far beyond the outer rim of this solar system, large like a medium-sized asteroid.

The big black object moved swiftly and silently towards the inner system. But as it passed the five asteroid belts of the system, it spit out small geological probes by the thousands and a few larger objects. Each time as it passed the orbital lanes of the twelf outer planets, it again spit out dozens of small probes and a few larger objects. And as the big object closed in to the green zone around the twin stars and more and more light reached its surface, it slowed down. There was something colorful on its surface, its strange-looking builders would call it an insignia. It showed a male and female individual of their species. They called themselves "humans", a gas-breathing life form with four extremities. But it was bio-cybernetic intelligence that controlled the ship, not them.

There were three planets within the green habitable zone around the twin stars, one of them orbiting just the smaller blue sun alone. The colonizer ship, on automatic mode, sent out yet another cluster of geological and atmospheric probes as it moved towards the inner edge of the habitable zone, Having reached the hot zone of the star system, the ship launched a number of larger objects towards the four hot planets. Then the colonizer slowly returned towards the center of the green habitable zone and waited for the incomeing results. This would take two years.

And as two years had passed, the ship's highly sophisticated artificial intelligence decided that this star system met all required criteria for human colonization, even after the surveys locally had been conducted. It was the 604th star system of a network of star systems the ship had been programmed to visit. Some systems where added by its human builders, and a number of systems were added by itself during its long-range scans during its voyages further and further away from the dying planet Earth - the planet that was the homestead of its builders. Sometimes, some systems looked very promising from afar, but the local surveys through its probes and antenna lead to a correction of the preliminary data and to the conclusion that certain frame conditions could not be met within that system. Two times in the past five thousand years of its search for a new homestead, there were indications that another colonizer had been arrived before, and that humans had colonized one or some of the planets there. But there were no humans anymore, for some reason they had disappeared after a few thousand years. Failked colonies due inner or outer problems. And so the search continued, avoiding these systems.

As a number of repairs had to be conducted before the humans could be woken up from their epic five-thousand years long sleep, the ship first woke up the Engineers. Those were genetically engineered by their human masters, and adapted to space, repair and no individualism. These tiny beings had four thin arms on a thin but legless body. There were also some among them which looked very different, adapted to some different tasks. They were able to speak, but the formerly human genome was twisted to such an extend, that they had no individualism left. They worked in groups, acted in groups, identified themself with the group they were assigned. Group leaders had their own genetically changed genome.

As each group completed the awakening of its members, it started to do the repairs on the parts of the mighty colonizer ship as directed by the ship's intelligence. The repairs took another two months. The ship also started to receive the first deliveries of ore from the automated mining factories it previously had launched together with the probes. The mining factories had their own mining vessels and worked since launch into the asteroid belts. Some of the moons of the gas giants in this system had their own primitive life, the probe results indicated, this would be something for later, for human scientists to look at. Interestingly, the same primitive life occured on a number of the moons. This might have been caused by asteroids of the same original planet that impacted different moons.

And after the two months of repairs had passed, the ship activated the awakening procedure of its human freight. Human engineers first, then the scientists, and afterwards all other professions. One million settlers.